A Guide to Initiating Sex for the Cripplingly Anxious
Tips for kickstarting copulation for the shy and self-conscious. 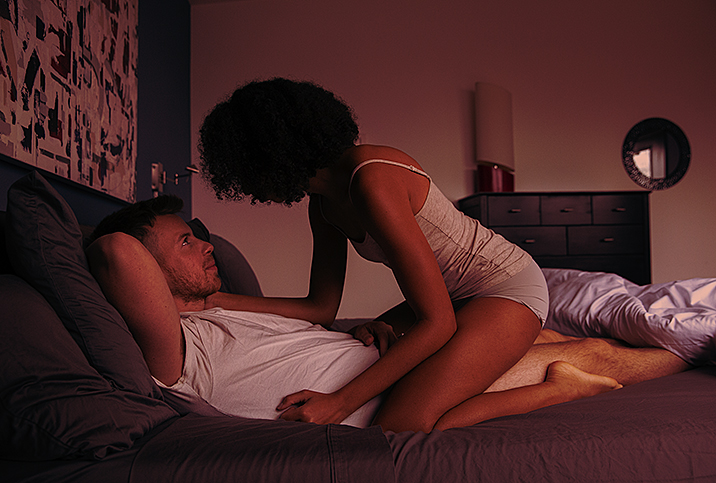 After landing my first grown-up writing job, I moved to Chicago. There, I met a man named Kal. Originally from Naperville, Kal had a nasal voice and a nervous habit of making fart noises with his mouth every time there was a pause in the conversation. For our third date, I'd taken the train all the way to the last stop on the Brown Line and walked several blocks on a dark, windy April evening to get to his apartment. I'd already made up my mind I'd be overlooking these shortcomings of his and be spending the night.

Kal, however, had other plans. We'd been making out on his couch for a solid 20 minutes when I busted out my signature move—that is, I tried to clumsily straddle him on his futon—when Kal pushed me off.

Subsequent dates would end similarly, with Kal abruptly calling it a night right at the point I expected sex to start happening. In the end, we never had sex, but years later, when I asked him about it, he confessed to having an STI and not wanting to have the conversation about having sex until he felt we were ready. Fair enough; responsible move; appreciate the consideration, Kal; relieved to know it wasn't due to the ineffectiveness of my signature straddle-you-on-your-futon move.

The reason I'm telling you this story, though, is because it is the only time I can think of in my history of being a mostly heterosexual female where I had to take a proactive role in initiating sex with a mostly heterosexual male. I don't mean to suggest this is because I'm so irresistible, but rather that, once things are getting hot and heavy with any heterosexual gal they're into, most heterosexual dudes seldom need nudging. When it comes to sex, men have generally always seemed eager to interpret—and very often misinterpret—the smallest signal as a green light/thumbs up/"ThunderCats, ho!"

Curious if my experience resonated with others, I conducted an exhaustive, highly scientific poll of 19 of my social media followers, and sure enough: The 11 male respondents, almost without fail, agreed that they usually initiate sex, while the eight women reported to either seldomly initiating or that it was "pretty much 50/50."

Interestingly, when asked, "Would you prefer it if your partner initiated sex more?," male responders across the board checked the "yeah, that'd be nice" box.

"[It's about] domination versus submission," wrote JD, 37, from Austin, Texas. "I definitely love to initiate but it's also nice to be preyed upon."

Bob, 30, from Los Angeles, agreed: "Sometimes it's nice to not be the person initiating as it shows they are really into you."

Mike, 34, said he doesn't like initiating sex, "Because I'd rather fulfill my partner's needs as well, but instead I am always positioning it as something I want/need."

He added that it'd be nice if his partner initiated sex more, "Not as a way to be dismissive of actual intimacy by getting me out of the way and off the checklist... [but] out of their own intrinsic motivation."

The case for initiating sex—even if you're shy

The poll results in, I began to question my own willingness to always take a shotgun seat in lovemaking. By staying in my comfort zone and always allowing my partner to initiate sex, might I be denying myself potential pleasure and limiting myself to his sexual appetites while at the same time pigeonholing us into oppressive gender roles?

"I definitely think that there is value in pushing up against all sorts of things that make us feel slightly uncomfortable," said Jet Setting Jasmine, a licensed clinical therapist, adult entertainer, sex educator and Master Fetish Trainer. "Because usually what's on the other end has a different experience—and even if we've learned that that is not our preferred experience, we at least give ourselves an opportunity to experience something different, something new to push our own range."

Addressing my highly scientific poll results, Jasmine told me, "The response shows that the men folks you've talked to have had a very linear experience. Whether or not they want or need it, their partner's ability to offer them a different experience can really be a nice gift."

Another reason to step into the role of initiator is to act as an advocate for our own pleasure. "Oftentimes, we're not on the same sort of need basis for sex as our partners," said Jasmine. "I could be super horny in the morning and my partner could be very willing to satisfy my needs, but he doesn't have the same sex drive in the morning. So, by passing up the opportunity to initiate, I pass up meeting my own needs. It can feel a lot less empowering when we are waiting for someone else to initiate sex, and on top of that, to initiate the kind of sex we would like."

"When you are the initiator, it is like an unspoken awareness that you are setting the pace of how things go and what actions happen next," said Tyomi Morgan, a model, educator and certified sexologist. "It shows that you are implementing the agency over your body and the agent will be over your right to choose. It's not something that you're being coerced into—it's not an action that you would prefer not to start with."

How to initiate sex for shy people of all genders

Use nonverbal cues to test the waters

"A lot of the most common initiators of sex are nonverbal," Morgan said. "Actions can be a very overt way of saying, 'Hey, I want you to do something sexual to my body.'"

One simple, but powerful way to initiate sex? Eye contact. "Glancing at your partner and giving them the look like 'oh, hey...' is a kind of initiation."

So is cuddling. "Let's say you're watching television on the couch and you're being a little spoon, you can kind of push your booty up against your partner," she suggested.

Both Jasmine and Morgan gave the example of guiding someone's hand. "If you're embraced in a kiss, maybe you physically place their hand on a part of your body that you would not typically offer," said Jasmine. "That can be kind of a, 'Oh, you want me to touch you there?'"

On that note, both Jasmine and Morgan emphasize the importance of using nonverbal cues mindfully and respectfully. It's part of a larger effort to change how you, and all of us, view sex. Nonverbal cues can be more comfortable for shy people, but as Jasmine pointed out, "We're really looking to change a culture of explicit consent, right? So it can be really tough to ask our partners to rely on our nonverbal cues and at the same time respect clear, clear boundaries on consent."

But she also understands the inherent challenge in that. "I do think for folks that are shy, they really have to get empowered to lean a little bit more on our verbal skills."

A verbal cue doesn't have to be as direct as "Let's fuck!" Indirect verbal indicators work, too.

Salacious text messages are another safe(ish), nondirect verbal way to let your partner know you'd like to get them between the sheets later.

"Sometimes I even go as far as to send pornographic material—it's a lot easier to let another adult star tell my fantasy," Jasmine said. But, critically, "I always ask first: Can I send you something naughty? Do you have privacy on your phone? Are you up to see a current fantasy? That automatically gets my partner going, 'Okay. I know that she's hot, you know, she's feeling hot,' and then it leads him to ask questions."

Especially if you're shy, Morgan is a proponent of keeping a few lines in your back pocket. "Being able to practice different phrases and know how you would present things to your partner is really important," she said. "That way, when it's time to actually do the things, you don't feel like you're stumbling over your words or jumbling things up."

She recommends practicing phrases very specifically to how you want to engage with your partner's body. Her suggestions: "I want to cuddle you right now—are you up for that?" or "Can I kiss you? You look so delicious today."

And what happens should the unthinkable occur—that is, your partner rejects your uncharacteristically bold, earnest and enthusiastically rehearsed sexual advances? Morgan stressed, "Just because your partner might not be interested in interacting with you right now doesn't mean that it's a complete rejection of you."

She noted, "We're living in a really weird time right now with COVID. People are fatigued and having a lot of difficulty with intimacy and sexual desire, so have some grace with yourself. Don't feel so much pressure to get it right every time."

Have a backup (to sex) plan

"Initiating does not necessarily have to lead to penetrative sex," she said. "Initiating can lead to a hot and heavy moment and then that moment passes and then you go back to your regularly scheduled program. Looking at initiating as a way to build upon moments that can lead to a deeper sexual act later takes a lot of the pressure off." 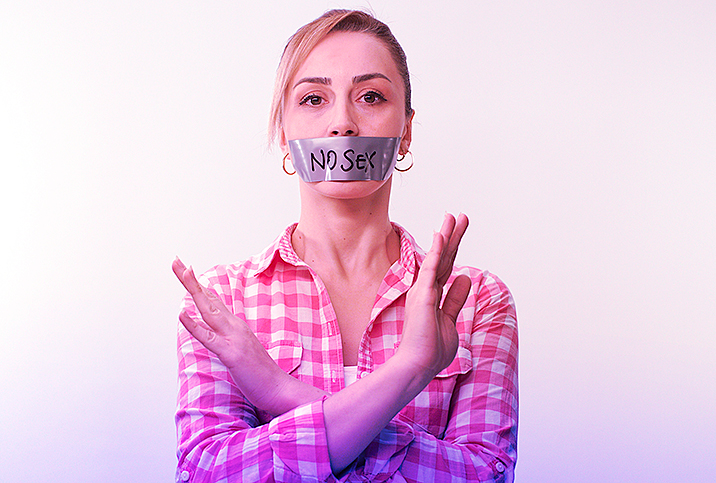 Is COVID-19 Causing a Rise in Cases of Sexual Aversion? 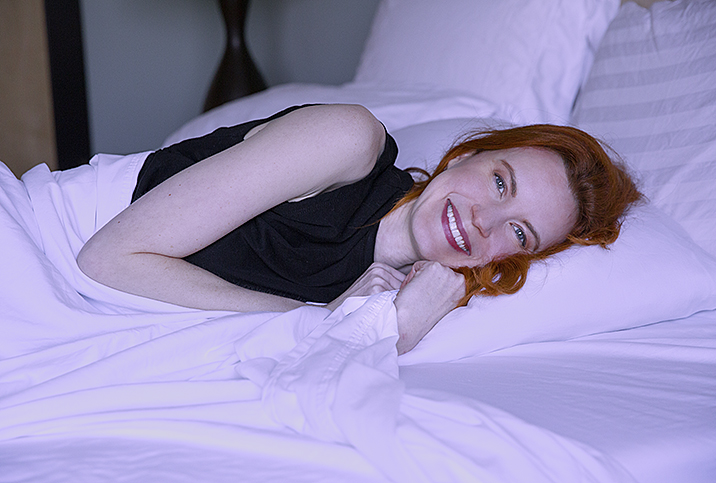 Calling All Women: Here's How to Enjoy Sex 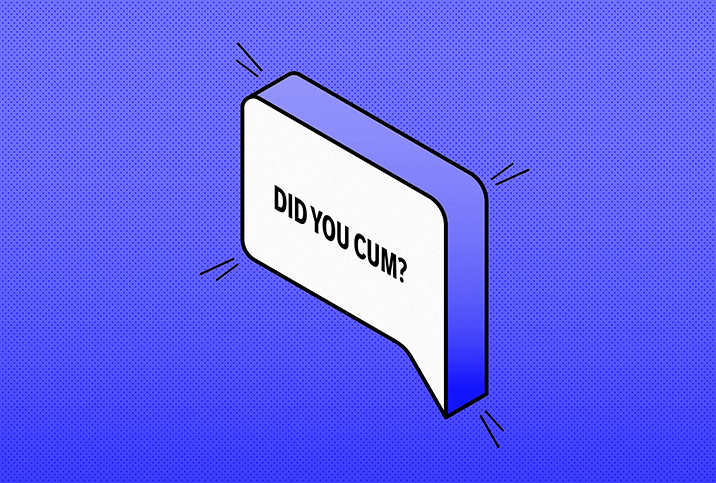 Please, Stop Doing That in Bed