Regaining Sexual Function After a Stroke

The Stroke Foundation states strokes don't usually cause sexual dysfunction, but at least half of patients suffer from sexual dysfunction after a stroke, according to the authors of a 2021 study published in the journal Clinical Neurology and Neurosurgery.

Strokes are typically clots and blockages that develop and prevent needed blood flow to the brain. They affect someone in the United States every 40 seconds and frequently result in long-lasting disabilities. As such, the possibility of developing common and life-altering complications such as sexual dysfunction, and specifically, erectile dysfunction (ED), emerges as a genuine concern.

"Up to 50 percent of people will have some type of sexual dysfunction following stroke," said Margaret McGrath, Ph.D., a senior lecturer at the University of Sydney in Australia. "Now the thing to remember is that sexuality is much more than just erectile function and it's much more than just sex. But if we were to hone in specifically on erectile dysfunction, the research would tell us that up to about 70 percent of men will experience erectile dysfunction following stroke."

No definitive studies on the odds ratio of ED after stroke compared to the aging population exist, according to Rocco Salvatore Calabrò, M.D., Ph.D., an affiliate with the Scientific Institute for Research, Hospitalization and Health Care (IRCCS) Neurolysis Center Bonino Pulejo, a cognitive and motor rehabilitation center in Messina, Italy. But the prevalence of ED in people who have had strokes is at least twice as high as it is in healthy matched controls. Calabrò indicated the risk range seems to be about 35 percent to 65 percent, depending on the severity of the stroke and the presence of comorbidities.

As Calabrò wrote in a paper published in Innovations in Clinical Neuroscience in 2022, stroke can affect all phases of the sexual response cycle, from commonly impaired sex drive to curtailed erection. And a body of research has documented significant decreases in sexual satisfaction post-stroke.

The causes, prognosis and methods for addressing male sexual dysfunction, including issues of achieving and maintaining sexually conducive erections after a stroke, appear to vary.

Those issues include body image, self-esteem and self-concept issues.

General societal attitudes about sexual attractiveness can reflect back on patients who've had a stroke, Lever explained. Also, unexamined assumptions or myths about individuals living with chronic disease and/or disabilities related to their capacity to engage in and resume sexual activity persist.

Lever said a person's self-concept may change after a stroke because of hemiplegia, the paralysis or weakness on one side of the body that can affect someone after a stroke.

"They might feel uncomfortable about those changes," Lever said. "They may not feel attractive. So that has a psychological impact on them, which then can have an impact on their performance and their ability to have an erection, because they're very anxious about that and whether they're going to be rejected…or not."

"Nonetheless, the extension of the lesion is pivotal, as it causes severe hemisyndrome, impairment of one half of the body, further affecting sexual activity," he said.

In addition to neurogenic factors such as brain lesions, Calabrò listed some of the main causal factors of sexual dysfunction after stroke:

Medications that can cause sexual dysfunction

"If, on one hand, pharmacotherapy is fundamental to better manage the disease and its potential complications, on the other hand, most drugs may cause sexual dysfunction [SD]," Calabrò explained in an article featured in the Journal of Men's Health in 2022. "Antihypertensive compounds are known to frequently cause SD, including erectile dysfunction (ED), ejaculation disorders and reduced sexual desire."

"Antidepressants are most likely to cause SD due to an imbalance in the dopamine-serotonin ratio, considering that dopamine exerts a positive effect on sexuality, whereas most serotonin receptors negatively affect sexual function," Calabrò said in an email.

Selective serotonin reuptake inhibitors (SSRIs), which are antidepressants, induce anorgasmia—the inability to achieve an orgasm—as well as delayed ejaculation. SSRIs are also associated with all phases of sexual function, he said.

"Angiotensin II receptor antagonists exert the most severe effect on sexual function, especially when combined with diuretics, which impair sexuality through different and still not-well-known mechanisms, including lowering of blood volume and flow and decreasing electrolytes," Calabrò said. "Beta blockers, except nebivolol, determine SD through their action on the adrenergic system, whose balance with the cholinergic pathway is fundamental for a vasogenic erection to exist. Calcium channel blockers and ACE inhibitors appear to have the best profiles, leading to fewer sexual side effects than other antihypertensive drugs."

Recovering from sexual issues following a stroke hinges on how prognosis and recovery are conceptualized, McGrath suggested.

Treatment involves the use of phosphodiesterase type 5 (PDE5) inhibitors, drugs such as sildenafil (Viagra) and tadalafil (Cialis). They are the only medications shown to be safe and effective for improving organic ED following a stroke, according to Calabrò.

If PDE5 inhibitors prove ineffective, second-line therapies include injectable and intraurethral agents and the local delivery of drugs such as prostaglandin E1 [PGE1] and papaverine, according to Calabrò's 2022 publication.

Many men don't like the idea of taking even more medication or injecting drugs into their penis. Eddie® is an FDA-registered Class II medical device designed to treat erectile dysfunction and improve male sexual performance. In 2021 clinical trials, Eddie was shown to be effective in treating men with physically, psychologically and pharmacologically induced erectile dysfunction. The results showed that 95 percent of men using Eddie were capable of achieving a beneficial effect in their sex lives.

In a study published in 2022 in the Annals of Physical and Rehabilitation Medicine, McGrath and her colleagues found stroke rehabilitation systematically neglects sexuality. Stroke rehab professionals surveyed by the authors indicated their desire for greater competency in regard to rehabilitation in the sexual sphere. Further, the study found the timing of training was important in terms of knowledge, comfort and the delivery of those sexually rehabilitative services.

It's widely accepted that stroke survivors should have the opportunity to receive actionable information about the impact of stroke on sexuality. They should have the chance to ask health providers questions about how to adjust to, cope with and manage changes in sexuality, McGrath said. Those opportunities are not always afforded to them, though. Only about one-quarter of patients in Australia, where she is located, receive the relevant information.

"Generally, healthcare practitioners are reluctant or [they] deprioritize addressing sexuality in the context of managing illness and disability," McGrath said. "In our ideal world, we would want it to expand beyond the focus on the erectile function. But assuming [the patient] is focused on erectile dysfunction, we will talk about having a comprehensive account of what's happening for that person."

This approach involves thinking about the impact of stroke in three areas:

It should be possible for patients to have conversations with professionals about how they can have satisfying sex lives despite complications resulting from a stroke.

"Acknowledging that sexuality is a very important aspect of health and well-being [is vital]," McGrath said. "And it may be [a referral] to a urologist. It may also be to a multidisciplinary team, including sex counselors, occupational therapists, physiotherapists, nurses, speech pathologists, depending on what it is that's causing the sexual dysfunction.

"And remembering that, yes, erectile function is important," she added. "But [there are] other aspects of sexuality that should also be considered."

Should You Really Be Having Sex After a Heart Attack? 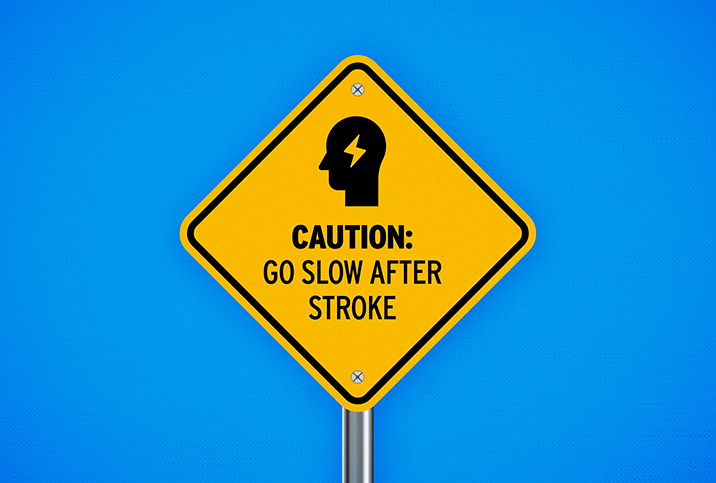 How Not to Die During Sex When You've Had a Stroke Assessing Your Risk of Having a Stroke