Know the Ties Between Hypothyroidism and Male Fertility

An underactive thyroid could lead to sexual dysfunction and infertility. 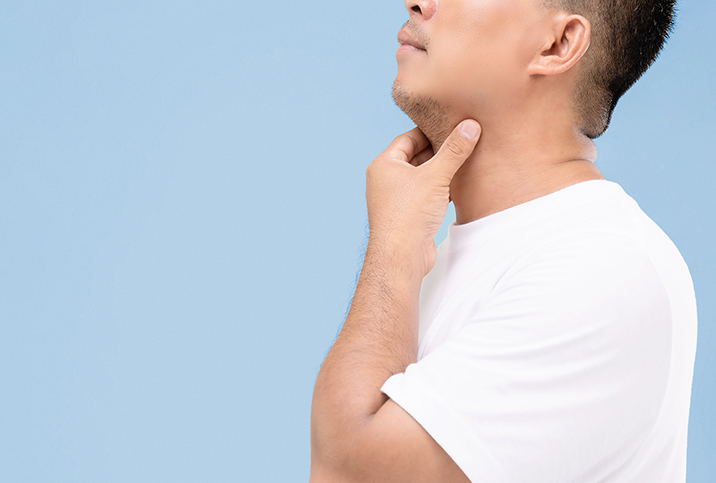 Conditions such as chromosomal disorders, diabetes and varicoceles may contribute to male infertility; so might lifestyle factors such as smoking, drinking and excessive weight gain.

Add this to the list of potential causes: a malfunctioning thyroid gland.

A 2008 controlled study published in the journal Thyroid found hypothyroidism (underactive thyroid) has an adverse effect on spermatogenesis, the process of sperm cell development in men. The study found sperm morphology (shape of the sperm) is the only parameter that is significantly affected. Motility (movement) and volume (number of sperm) are the other two main sperm parameters. The abnormalities improved or normalized when the thyroid problem was treated.

Another 2018 review found thyroid disease is an important factor in the development of male sexual dysfunction, and the evidence suggests the dysfunction can be reversed when the thyroid disorder is corrected. However, the authors concluded that "the exact pathophysiology of thyroid-mediated sexual dysfunction remains unknown."

"If you have [hypothyroidism], it will be harder to climax," said T. Mike Hsieh, M.D., a professor of urology and the director of the Men's Health Center at UC San Diego Health (University of California). "If you have difficulty with climax and ejaculation, then you can't deliver your sperm properly."

"If you have [erectile dysfunction] or ejaculation problems, you're going to have fertility problems," he continued. "One could be directly impacting production of sperm, but the other one has to do more with delivery of sperm relating to sexual problems."

What are the symptoms of hypothyroidism?

Hypothyroidism is much more common than hyperthyroidism in both men and women. Thyroid disease in general, though, is five to eight times more common in women than in men, according to the American Thyroid Association (ATA).

Classic symptoms of hypothyroidism include:

Some men with profound hypothyroidism have few or no symptoms, however.

"You can have textbook hypothyroid symptoms and it's not due to the thyroid," said Elizabeth Pearce, M.D., an endocrinologist and a professor of medicine at the Boston University School of Medicine. "It's due to something else, because these are all common and can be caused by other things."

On the other hand, common symptoms of hyperthyroidism include heat intolerance, rapid heart rate, shakiness, anxiety and frequent bowel movements.

"It's not life-threatening or serious," Pearce said of thyroid disease. "It can cause impaired quality of life and, certainly, is important to diagnose and treat appropriately."

Normalizing the hormone and, therefore, reverting to a healthy thyroid tends to reverse the symptoms, she explained. Blood tests are always needed to confirm the diagnosis because the symptoms of thyroid dysfunction are nonspecific.

The most common cause of hypothyroidism is Hashimoto's thyroiditis, an autoimmune disease that tends to run in families. Patients with this disease develop thyroid antibodies that attack the thyroid gland over time, according to Kenneth Burman, M.D., a professor of medicine at Georgetown University.

The most common treatment for hypothyroidism is the oral medication levothyroxine. It replaces the thyroxine hormone that the thyroid is producing in insufficient quantities, and is typically taken once every morning or night.

"It works really well and normalizes the thyroid hormone levels in the blood," said Burman, who is also the director of the Endocrine Fellowship Program at MedStar Georgetown University Hospital and MedStar Washington Hospital Center. "We monitor those in four to six weeks. If they're fine, continue on the medication. If they're not fine, we alter the dose."

Many of the pathways for thyroid hormones are related to testosterone, according to Hsieh.

The pituitary gland in the brain releases thyroid-stimulating hormone (TSH), which triggers the thyroid to produce and release the hormones thyroxine (T4) and triiodothyronine (T3). Both are essential for metabolism and other important functions.

"Oftentimes, people with thyroid issues have the same testosterone reproductive hormone problems, too, because that's the same part of the body that sends these signals to produce sperm, to produce testosterone and to produce thyroid hormone," Hsieh explained.

Clinicians don't yet know how the thyroid hormone acts on the testicles, he added. What medical professionals do know is that the thyroid has ties to metabolism.

"This is probably more of a metabolism problem, and that somehow leads to a sperm production problem," Hsieh continued.

A man with hypothyroidism has an upregulation of the hypothalamic-pituitary axis, meaning the feedback loop is increased in trying to produce more thyroid hormone. This secondarily causes prolactin, a hormone made by the pituitary gland, to increase, according to Lael Stieglitz, M.D., a urologist at Baptist MD Anderson Cancer Center in Jacksonville, Florida.

Prolactin shuts down the testosterone access and decreases gonadotropin-releasing hormone (GnRH) secretion from the hypothalamus. GnRH is responsible for the regulation of luteinizing hormone (LH) and follicle-stimulating hormone (FSH), which lead to testosterone and sperm production, respectively. A man with high prolactin and low testosterone likely suffers from low libido, erectile dysfunction (ED) and infertility issues, Stieglitz explained.

As a urologist, she said she does not routinely screen patients for thyroid disease.

When Hsieh evaluates a patient for fertility issues, he checks their sperm count. If it is low, he then screens them for thyroid disease, "because that's very treatable," he said.

"If you have too much thyroid or not enough thyroid, we have ways to treat that," Hsieh said, adding that some other factors are untreatable.

Hsieh wants to correct as many issues, including thyroid abnormalities, as he can before looking at fertility treatments, such as in vitro fertilization (IVF) or another type of assisted reproductive technology (ART).

Pearce explained that thyroid disease is much better studied in women than in men because it's more common in that demographic, and women are easier to track because of disruptions in their menstrual cycles. There are also more studies of fertility in women, she said.

Hypothyroidism has been associated with ED and decreased libido in humans in small clinical studies, Pearce added. Those symptoms are often reversed if patients diagnosed with hypothyroidism are treated with thyroid hormone replacement.

Pearce called the existing studies on the potential links between thyroid disease and male infertility suggestive.

"It's certainly biologically plausible, but we just don't have enormous amounts of data," she said.

Burman said the impact of thyroid disease is inadequately researched in terms of double-blind controlled studies.

"We really don't have a tremendous understanding of what happens and the mechanisms," Burman said. "There are multiple animal studies, mainly in rats, which may or may not be relevant to humans. But, in general, hypothyroidism adversely affects semen quality by compromising semen volume and sperm motility."