Posthumous Sperm Retrieval: Is It Ethical and How Does It Work? Skip to main content

Posthumous Sperm Retrieval: Is It Ethical and How Does It Work?

Death is not the end. Up to 36 hours after a man dies, his sperm can still produce children. 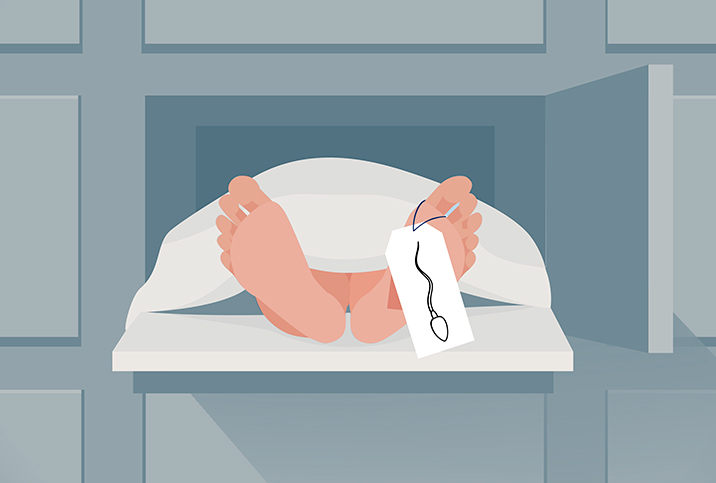 Can a dead man father a child? Absolutely. Should he? Well, it all depends on who you ask.

Posthumous sperm retrieval is the extraction of the male's gametes, or sperm, after his death. Typically, the intention is to preserve the DNA of a man who has met a sudden or untimely death in order to continue his bloodline through assisted reproductive technology.

This medical procedure has been around for more than 40 years. The first recorded attempt at posthumous sperm retrieval dates back to 1980, and the first baby to be conceived with the help of the procedure was born in 1999.

Posthumous sperm retrieval is a controversial subject. In the United States, it is not regulated by law and the choice of whether to extract the sperm is given to the medical institution where the request is made. These requests are rare and far between, but they do occur. Other countries, such as France and Australia, have outright banned the procedure, while some others and the United Kingdom allow it provided there is evidence of written consent from the deceased.

The logistics of sperm retrieval

The subject is approached in widely different ways mainly because of the hefty ethical, logistical and legal considerations that it raises.

Let's start with logistics because this covers the practicalities of the procedure. First of all, there's a time constraint. Sperm needs to be extracted no later than 36 hours after a man has taken his last breath.

"The sooner the better," said Paul Thompson, M.D., a board-certified urologist in Fort Worth, Texas, and a fellow in the American College of Surgeons. "Managing the paperwork and permissions can take a day or more, assuming there are no legal challenges. But within two to three days of the death, prospects for successful retrieval begin to drop as the body decays. However, if they're an organ donor, the process can be much faster and happen within hours, especially if they're already at the hospital."

Within two to three days of the death, prospects for successful retrieval begin to drop as the body decays.

A variety of methods can be employed to extract sperm from a corpse.

"It can be done using sterile technique wherever the donor individual is situated and is also performed along with other organ harvesting in perimortem [brain-dead] patients," explained Paul Turek, M.D., an award-winning urologist and internationally acclaimed men's sexual health expert based in California. "Minimal surgical equipment is needed and there is no bleeding typically found with live surgery. Several approaches are also possible, including biopsying or removing the testicles or epididymis and extracting sperm from the vas deferens. In brain-dead but live patients, rectal probe electroejaculation can be used to induce an ejaculate that can be banked."

Who holds the rights to a dead man's sperm?

Moving on to the legal implications, in the U.S., most hospitals only consider honoring a request for sperm if it comes from the wife of the deceased. However, there have been cases where the parents of the deceased obtained the right to extract their son's sperm using an emergency court order.

Another legal matter to consider is how a potential baby fits into the inheritance picture. If the man did not consent to have a child when he was alive, does the child get to inherit their dead father's property and survivor privileges? Should the deceased father even be on the birth certificate?

The issue of consent also has a huge bearing on the ethics of the procedure, which is not only invasive but also may bring a human being into the world. The welfare of the child must be considered, and since the father is no longer alive, will the mother be capable of providing a stable and secure home as a single parent?

Ethically, it may be hard to justify the procedure without any evidence that the deceased man would have wanted it to be conducted.

According to Turek, post- or perimortem sperm retrievals are highly charged endeavors, sociopolitically and ethically. Some of the considerations that surface in these cases:

What it really comes down to is consent, and if it isn't in writing, then deciding the merit of a request depends on the circumstances. As mentioned, most guidelines in America advise that only a spouse can lay claim to the sperm of the deceased man.

"Posthumous reproduction is a hot topic in reproductive law right now as it directly relates to inheritance and other legal issues," explained Janene Oleaga, a family formation attorney in Portland, Maine, who often works with same-sex couples and LGBTQIA+ individuals growing their families through assisted reproduction, surrogacy, egg donation, sperm donation, embryo donation and adoption. "The American Society of Reproductive Medicine's position is that without prior written consent from the decedent, requests for postmortem sperm harvesting should be denied."

She added that the ASRM Ethics Committee issued a written opinion on this topic in 2018.

Communicate and write it all down

Death is inevitable, so if you think this situation may become applicable, you may want to play it safe and talk to your spouse about the issue of posthumous sperm retrieval. Putting your decisions in writing would definitely help make the approval process easier if the situation ever called for it.

"This is absolutely something partners should discuss, and if agreed on, it is best if the donor states his wishes in writing with proper legal needs taken," Thompson said.

Oleaga agreed: "I absolutely think men should consider and discuss with their partners whether they would want to father a child after their death. Whether it is ethical is a gray area, but certainly, the norm should be to follow guidelines provided by the ASRM."

Unsurprisingly, this discussion among couples almost never happens. The decision to honor a request is often left to the physician, whose final call hinges on the information they have at hand and the ethical framework outlined in their hospital's guidelines.

"Sperm is life and, therefore, dramatically unlike any other heritable 'property' owned by its donor," Turek noted. "I believe that there should be a separate dot on driver's licenses, right next to the organ donor dot, that outlines the destiny of reproductive tissue in advance of the donor's death. Completing this dot on the driver's license would encourage those conversations so important regarding posthumous paternity."