Are You Staying in a Toxic Relationship Because the Sex Is Great?
If incredible sexual chemistry is a couple's only redeeming quality, experts have some advice.

Picture the scene: You're in a relationship that's really starting to show cracks. You've been together for a few months but your incompatibilities are becoming more glaringly obvious by the day. It turns out your politics and family values aren't quite as aligned as you once thought. Or worse, maybe your partner has made you feel bad about yourself on several occasions.

You know the relationship isn't right, but there's a catch: The sex is really good.

This is the only partner who has ever taken the trouble to ask what you like and put in the time to help you reach that elusive climax. When the two of you are together in bed—often for makeup sex after a fight—it's like the rest of the world doesn't exist.

So any conflict must just be a rocky patch that all couples go through once the honeymoon period is over. For the time being, at least, you decide to stay.

The sex is amazing

Staying in a toxic relationship because of good sex is surely an open-and-shut case: We shouldn't do it. Right?

In an age of perpetual overanalysis and hypervigilance for red flags, we may try to convince ourselves that we're being too fussy. But it's not healthy to stay in a harmful relationship just because the sex happens to be amazing.

"Romantic and sexual chemistry are often confused," said Stephen Hirsch, L.C.S.W., a couples therapist at the Relationship Suite in New York City. "People frequently convince themselves to stay in a romantic, emotional relationship simply because the sex is good, but that is not a situation that is likely to last and can often turn quite bad."

Vasia Toxavidi, M.Sc., a psychotherapist and interpersonal coach in London who is accredited by the British Association of Counselors and Psychotherapists (BACP), warned of an inherent trap caused by staying in a toxic relationship for sex.

"People [could] believe that…even if they don't have the romantic intimacy they want, because [the] sex is good then romantic intimacy will follow," she cautioned. "Sometimes this is not the case and this is when people get confused and heartbroken."

Staying where you are in a relationship is far more common than you might think. There are multiple reasons someone might consider sex a good reason to stay in a relationship, even if it's not healthy or fulfilling. For starters, there's the element both Hirsch and Toxavidi mentioned: confusing sexual chemistry with romantic connection.

There are other reasons, too. People often use confirmation bias in this situation, said Katherine Hertlein, Ph.D., of Nevada, a relationship and sex therapist for the Blueheart app, based in the United Kingdom.

"They basically confirm that the sex is good so they are an appropriate partner," she explained. "This dynamic means they may consistently minimize and rationalize why the problems are there."

Hertlein listed other reasons partners might justify good sex as a need to stay in a toxic or fundamentally incompatible relationship:

When a relationship is toxic

Toxic relationships are in a separate category entirely.

"Toxicity is when people exist in a relationship, but it is not healthy," said Lee Phillips, Ed.D., a psychotherapist and sex and couples therapist in New York City and McLean, Virginia. "Toxic relationships are centered on manipulation and abuse."

Staying in a toxic relationship because sex is amazing is never a good idea. So how can someone extricate themselves, especially when research indicates it takes approximately seven attempts for survivors to finally leave an abusive partner?

"It's important to remain intellectual and logical when dealing with relationships," Hirsch said. "As you understand and accept that the relationship is toxic, it may be harder to compartmentalize the sex."

"If someone wants to leave a toxic relationship but finds it difficult due to good sex, then [it] is important to ask themselves why they need to stay in that relationship and whether they deserve it," Toxavidi agreed. "What [does] sex [represent] for them that they are willing to go through emotional abuse and be emotional[ly] unfulfilled for it?"

"Surrounding yourself with people who care about you can be a great motivator in leaving a toxic relationship," Phillips added. "When friends and family can be judgmental, seeing a sex and relationship therapist can be helpful in making healthy decisions in what you want in a relationship."

It's important to identify and separate toxic relationships—the kind that have partners being gaslit, emotionally abused or worse—from relationships that house fundamental incompatibilities, such as differing love languages or contrasting hopes for the future.

"Incompatibility means people cannot exist in a relationship," Phillips said. "They are very different in nature, meaning they have nothing in common because they may have opposing values for what they want in a relationship."

Is it possible to transition an incompatible relationship into a sex-only one, if the sex really is that good? In other words, can you ever switch to just being friends with benefits (FWB)?

"I think this is possible," Phillips said. "Two people may try to date over a period finding there is no emotional connection, but eventually realize they are highly attracted to each other and decide to keep it sexual."

"Some people can separate the sex and the emotions," she explained. "Some people compartmentalize. So if they're happy with the arrangement, that is absolutely fine. But—big 'but'—people who do it successfully, from committed to FWB, must discuss and be honest with each other. It'll be problematic when you're willing to go through the arrangement thinking you'll get them back."

Can sex ever be a reason to stay?

"It depends on the relationship," Phillips said. "If the person is happy with just good sex and this is most important to them, then yes, they may decide to stay in a relationship. However, if it is [a] toxic relationship, then it is important for [the] person to think about the harmful consequences of what can happen to them despite having good sex."

If the relationship is damaging to you, it's just not worth it.

"The world is a big place," Hertlein said. "If you're in a toxic relationship and the sex is good, keep looking." 5 Signs Your Partner Is Gaslighting You Bombs Away: A Love Bomb Explainer 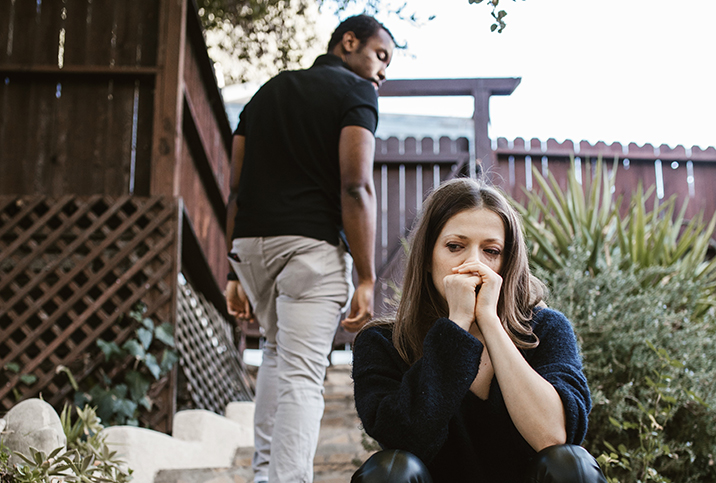