What Is Obstructive Azoospermia and How Is It Treated? Skip to main content

What Is Obstructive Azoospermia and How Is It Treated?

This condition prevents sperm from entering the ejaculate, but solutions are available. 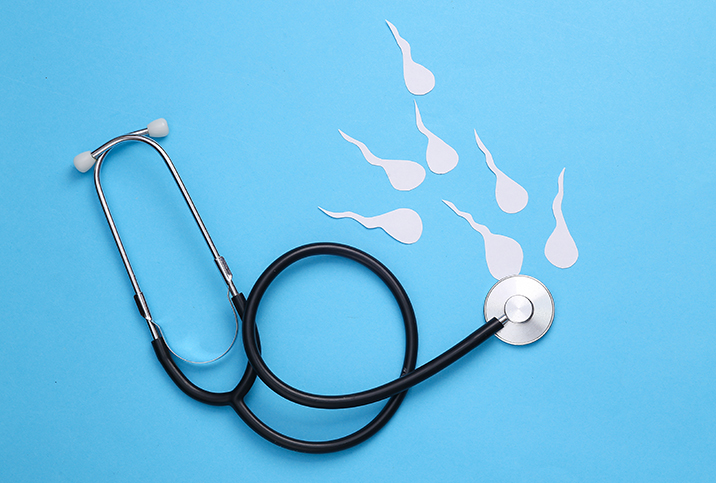 Male infertility can result from a number of complications. For instance, some men can't produce any sperm, some can't produce an optimal amount, and others might experience a blockage preventing sperm from being released into the semen.

Azoospermia—the lack of measurable sperm in the ejaculate—is identified in 10 percent to 15 percent of infertile men and in 1 percent of all men. It can be classified as obstructive or nonobstructive.

A normal sperm count is 15 million or more per milliliter of semen. Nonobstructive azoospermia occurs when the testicles produce less than that amount or none at all. It's responsible for approximately 60 percent of azoospermia cases.

Men with obstructive azoospermia, on the other hand, have a high enough sperm count but an absence of sperm in the ejaculate. This could be because of a blockage or a missing connection along the reproductive tract.

How is semen produced?

After the testicles produce sperm, it's stored in the epididymis, which is located on the back of the testicles. But since tiny tubes make up the testicles—they aren't balls of tissue, so to speak—blockages can occur anywhere, even before the sperm reaches the epididymis. The vas deferens, a muscular tube attached to each testicle, then transfers sperm to the seminal vesicle.

There, along with additional fluids, the seminal fluid moves toward the urethra. Meanwhile, the prostate gland adds a milky juice to create semen, which is released through the urethra.

Blockages can occur in three prominent locations with obstructive azoospermia. These include the epididymis, the vas deferens and the ejaculatory duct, according to Justin Houman, M.D., a reproductive urologist and men's health specialist at Tower Urology in Los Angeles and the medical director for Bastion Health, an app-based telehealth platform for men.

"The epididymis is a complex bundle of coiled tubes where sperm mature, [and] these tiny tubes can get obstructed, causing obstructive azoospermia," Houman said. "The vas deferens is the tube that carries sperm from the testicle to the urethra. Due to trauma, infection and previous vasectomy, the path of sperm from the testicle to the urethra can get obstructed. The ejaculatory duct…which is involved in releasing sperm into the ejaculate, can [also] get obstructed, causing azoospermia."

"Common causes of obstructive azoospermia include congenital or genetic causes, postvasectomy and iatrogenic [e.g., result of prior surgery]," said Denise Asafu-Adjei, M.D., an assistant professor of urology and the medical director of male reproductive medicine at Loyola University Chicago Stritch School of Medicine.

How to diagnose azoospermia

Azoospermia is diagnosed through a combination of a sperm sample and semen analysis, a medical history and a physical examination. Further tests may be required, too.

The examination of sperm samples is carried out on two separate occasions. These tests can reveal if sperm is present in the semen. With the help of a centrifuge, clinicians can separate the sample into various parts. This allows the sperm cells to separate from the fluid, making their presence visible under a microscope.

As part of the medical history chat, doctors inquire about the following:

During the physical examination, your healthcare provider checks for any signs of lack of maturation in your body and reproductive system. A thorough examination of your genitals is also conducted.

Checking testosterone and follicle-stimulating hormone (FSH) levels may be warranted if further examination is necessary. An X-ray, ultrasound and imaging of the brain can be performed. A testicular biopsy is another possibility, as is genetic testing for a gene mutation.

How to treat obstructive azoospermia

Treatment is always based on the underlying causes and may include a combination of medication, antibiotics and surgery.

"If [there's an] infection, antibiotics would help relieve the source of obstruction," Houman explained, adding that in the case of ejaculatory duct obstruction, a transurethral resection can be performed to open the duct.

"Vasectomy reversals can be a treatment for postvasectomy causes of obstructive azoospermia, and other surgical interventions can also be done for other underlying causes," Asafu-Adjei added. "Ideally, if the obstruction is relieved, the reproductive tract can be restored and sperm can now travel freely out of the body with the rest of the ejaculate."

Genetic-based azoospermia cannot be prevented. Steps can be taken, though, to decrease the chances of suffering from obstructive azoospermia.

Look out for the risks and benefits of medications that could negatively affect sperm production. Avoid exposure to radiation and activities that could lead to injuries in your reproductive organs, and don't expose your testicles to hot temperatures for an extended period.