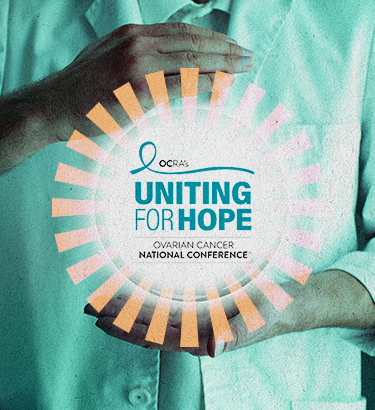 Attendees from around the world gathered virtually to learn about new treatment advancements.

Conference participants attended a mix of live and prerecorded "on-demand" sessions, along with breakout Q&A sessions and "meetup" opportunities for different demographics, including first-timers, male caregivers and young adults.

Audra Moran, president and CEO of OCRA, addressed attendees from 26 states as well as Canada, Israel, Malaysia and several European countries during her opening remarks. Shannon Miller, an ovarian cancer survivor and Olympic gold medalist, and Katie Hogg, director of patient advocacy for U.S. oncology at pharmaceutical company GSK, gave warm welcomes as well. GSK was the presenting sponsor for the conference.

Members of the global ovarian cancer community then dispersed to attend various sessions, explore the resources available on the conference platform, and connect with other participants through the message center and networking lounge.

The following are some highlights from the three-day conference.

Rates of new ovarian cancer cases and deaths are both decreasing. Blank said this decline is primarily due to three factors:

Ovarian cancer is also now treated as a spectrum of conditions.

"Ovarian cancer is not one entity. We used to treat everybody the same," Blank explained.

Now, researchers know there are many different subtypes of the disease which require unique approaches. The subtypes are based on where the cancer originated in the gynecological tract.

"One size of ovarian cancer does not fit all. We need to find the right patient, the right drug, at the right time, and that's absolutely not the same for everybody," Blank emphasized.

Fortunately, in recent years, several new types of medication that can provide a more targeted approach have been developed. Blank said the only treatment options available before 2010 were forms of chemotherapy, but since then, all the treatments developed have been targeted agents that work differently and more precisely than chemotherapy.

In fact, there have been more drug approvals for ovarian cancer since 2014 than in the previous 60 years combined. These targeted medications are often used in combination with surgery and chemotherapy to provide the best outcomes.

Blank stressed that these advancements have been possible because of the availability of clinical trials.

An overview of clinical trials

Taking attendees through a "Clinical Trial 101" on-demand session was Shannon Westin, M.D., M.P.H., a professor and the director of early drug development in the department of gynecologic oncology and reproductive medicine at the University of Texas MD Anderson Cancer Center in Houston.

A clinical trial is research that directly involves patients who have volunteered to be involved, Westin explained. Trials are focused on improvements in healthcare at all levels, including screening, prevention and outcomes.

Westin stressed that clinical trials occur at the tail end of an intensive investigative process and gave the example of paclitaxel, a chemotherapy medication that was discovered in 1967 but not subjected to clinical trials until the 1980s, before becoming a standard of care in the '90s.

The road for a new medication from initial idea to approval by the Food and Drug Administration is long. Westin gave an overview of the process:

Phases I through III utilize human volunteers to understand how the medication affects people. These are the steps in which patients can get involved if they're interested.

Pros and cons of clinical trials

Westin outlined the benefits and risks for patients during clinical trials:

If you're interested in participating in a clinical trial, talk to your physician about what is available in your area. You can also search ClinicalTrials.gov, a National Institutes of Health database of privately and publicly funded clinical studies conducted around the world.

The National Comprehensive Cancer Network's guidelines specify that patients with ovarian cancer, fallopian tube cancer and primary peritoneal cancers should receive genetic risk evaluation and germline and somatic testing. But what does that mean exactly?

Barbara Norquist, M.D., a gynecologic oncologist and an assistant professor at the University of Washington Medical Center in Seattle, discussed the differences:

Genetic testing is recommended because of this genetic component. It's beneficial for the recently diagnosed patient to help tailor their treatment method, and it's also beneficial for any first-degree relatives because they have a 50 percent increased risk of also developing cancer.

If you think you may be at increased risk of developing ovarian or breast cancer, Norquist recommended searching the National Society of Genetic Counselors directory to find a counselor near you. If you've already been diagnosed, your oncologist can directly order genetic testing and then connect you with a counselor if they feel it's needed.

Norquist also noted that if someone had genetic testing done prior to 2013 and it came back negative, it's recommended they be tested again due to expanded testing now available.

One challenge with ovarian cancer is that physicians don't know what ovarian precancer looks like, so preventing it before it becomes cancer is not currently possible. If researchers had that piece of the puzzle, they could implement primary detection strategies.

Some other forms of cancer have effective screening strategies in place. The use of Pap smears and HPV testing, for example, are screening tools used to find cervical cancer early and prevent it by identifying precancer cells. The HPV vaccine can also prevent cervical cancer.

"We have to work harder, that's the only answer," Castle said regarding the difficulties of ovarian cancer prevention.

"Ovarian cancer isn't one disease; it doesn't have just one cause," he added. "That makes it incredibly difficult."

Currently, the CA125 blood test and imaging tests, such as ultrasounds, are used to screen for ovarian cancer, but those have their limitations, explained Deborah Armstrong, M.D., a professor of oncology and obstetrics and gynecology at the Kimmel Comprehensive Cancer Center at Johns Hopkins University in Baltimore. She explained that the CA125 blood test is good for detecting cancer that has already migrated outside the ovary, but it can't find precancer or cancer that hasn't spread.

She also noted that the overall risk of ovarian cancer in the U.S. general population is 1 percent to 2 percent. For women in high-risk demographics, on the other hand, the risk can be up to 40 percent. Learning your level of risk helps determine how extensive your screening should be. However, screening can be difficult psychologically as well as physically.

"What it takes to diagnose ovarian cancer is surgery, and that can be very traumatizing for people," said Annie Ellis, an ovarian cancer survivor and research advocate.

She presented the example of the numerous tests and biopsies her sister has undergone due to increased genetic risk, all for what have so far turned out to be benign findings.

"Whether we're talking about prevention or treatment, we always want to maximize the benefits and minimize the harms," Castle said.

Unfortunately, the limitations of ovarian cancer screening for early detection mean patients must rely on being aware of their symptoms. But this is difficult, too, because ovarian cancer symptoms are often nonspecific and vague. For example, they can include abdominal pain, heartburn and bloating, all of which are also common symptoms of much more benign conditions.

So what is the good news? Armstrong said funding for ovarian cancer has increased fourfold over the past decade, from $10 million to $40 million, which is allowing for additional research into better screening practices.

One of the exciting findings within the past decade is the role the fallopian tubes play in ovarian cancer and how effective removing them can be in preventing the disease and reducing recurrence.

"That has allowed us to move forward a little bit," Armstrong said. "This information in the last five to 10 years has really changed our approach."

You can learn more about OCRA's 2022 conference and the organization's latest research initiatives on its website.