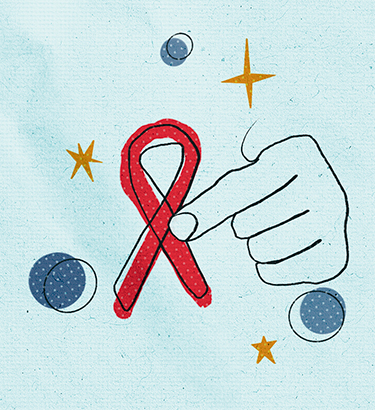 Some New Year's Resolutions for HIV/AIDS in 2022
There's still work to do next year to combat the human immunodeficiency virus.

As HIV/AIDS Awareness Month comes to a close, along with the 21st year of the 21st century, it's nice to step back and celebrate the many advancements that have been made with regard to HIV.

There's no apt metric or description to explain the suffering that has been avoided and mitigated as a result of new medications, new advances in screening, and even the subtle and sometimes too-slow improvements in public discourse and perceptions surrounding HIV and AIDS.

But as we look backward and celebrate our progress, we should still recognize the progress left to achieve. HIV and AIDS still impact the entire world, as well as large swaths of people, right here in North America. If we want to eliminate HIV as a constant public health concern, we have to make improvements.

Here are four New Year's resolutions for everyone to think about in 2022.

The scientific accomplishments of HIV research have benefited the world in immeasurable ways beyond HIV care. When you think about what the struggle against HIV has revealed about the human body—from our basic understanding of the immune system to the development of messenger RNA technologies—it's truly a wonder that people actually affected by HIV and AIDS are still so marginalized, yet distinctively monitored, by state and federal agencies.

Industrialized nations are happy to reap the benefits of HIV patients as data sources, but in the U.S. at least, those same patients are often subject to a host of demoralizing and infantilizing conditions from their own primary care providers and officially state-sanctioned agencies.

Those who work in HIV treatment and prevention might say our scientific and social priorities need a complete overhaul before we can hope to make any headway in eradicating HIV. Others might say we need pharmaceutical companies to have less influence over the market itself and that we don't need nearly as much research and funding diverted to the cause of an HIV vaccine. Instead, some of the effort to produce an effective HIV vaccine—which would clearly benefit seronegative people more than those who have an HIV diagnosis—might be better focused on things like an actual cure for HIV-positive people, or improving access to treatment and prevention options, like PEP and PrEP.

"We just don't need a vaccine anymore, because we can get to a point where the virus can stay with one person and never be transferred ever again," said Markalain Dery, D.O., MPH, FCOI, an HIV care specialist and infectious disease expert in the New Orleans area. "Now that we have the knowledge of U=U [undetectable = untransmittable], we don't need a vaccine anymore. We can just test and treat our way out of HIV. We can do it."

Of course, these statements aren't intended to undermine the importance of HIV vaccine-relevant research in any aspect. Scientific work and study focused on the effort to produce an HIV vaccine have been vital to medical progress in a variety of avenues, including medications, treatments and prevention options for HIV and other conditions, along with COVID-19.

However, Dery's comments do call attention to the fact that the effort to end the HIV epidemic has been slowed by a few problematic aspects of the American healthcare infrastructure. The U.S. has a uniquely privatized and politically motivated landscape pertaining to healthcare, sexual education and other legislative and social issues, which impact the fight against HIV and AIDS.

For many people close to that fight, one of the fundamental first steps toward victory involves creating more room for people living with HIV, from all walks of life, to be represented when it comes to the policies and politics of HIV prevention and treatment in America.

More seats at the table

HIV is a global health concern and affects people of many different identities, cultural associations and sexual orientations. The condition does disproportionately impact certain populations, including men who have sex with men (MSM), but the virus also disproportionately affects historically overlooked and oppressed populations, including trans communities and people of color.

Sometimes the people who get overlooked most are the most in need. Other times, those in need are the ones the rest of us rely on from birth to adulthood.

"The other source that's really important to get a voice from are the recently incarcerated or recently released," said Christine Brennan, who has more than 20 years of experience relating to HIV and AIDS education and treatment as a nurse practitioner and educator in Louisiana. "The thing about recently released is that, like the youth, you do have to continually update your sources. Because recently released means that after two years, you're no longer recently released and you need somebody new [to speak for that population]."

Incarcerated individuals, especially those with drug-related records, can be particularly vulnerable to a range of health issues, including STIs/STDs. Ensuring these individuals maintain retention of treatment when living with HIV can be a massive effort for certain states, services and state agencies. In Canada, women living with HIV (WLWH) were found to be over-represented in the correctional system. It was then determined that additional support was needed in order to mitigate treatment lapses and the possibility for repeat criminal offenses.

Gina Brown is director of strategic partnerships and community engagement with the Southern AIDS Coalition (SAC), as well as a long-term survivor and woman living with HIV. She noted that past efforts on a federal level have failed to address the needs of adult WLWH except as it pertains to their role as mothers.

"The [Medicaid] part D, which was for women and for children and youth, was created for those babies, and the moms were just the baggage that came along with the babies," she said, adding that women of color, in particular, have received almost no focused attention from the White House in comparison to other groups.

"They had a meeting with Black women that went nowhere," Brown explained, referring to several attempts by various presidential administrations to meet with different populations affected by HIV and AIDS in America. She talked about how Black women are often relied upon for support in many communities but are not sought out when it comes to federal or statewide input on HIV and other healthcare concerns.

"We accept all of these things, and we fight for everybody, but we really need to start fighting for us," she added. "And we need the federal government to see us. Even the state and local governments."

"Unfortunately in the HIV world, here in the U.S., you're dealing with people who are significantly impoverished as well as lacking the education needed," Dery said. "Back in the day, that was really problematic—it's a little bit easier now with just one medicine once a day. But still, for us to get where these other countries are with Fast Track Cities and 90-90-90, it's going to require a lot of work on our part.

"We just, really quite frankly, don't have the politics to stomach it," he continued. "They're still going to stigmatize LGBTQ issues, they're going to continue to gut programs because of the stigma that HIV has in our society."

When we talk about HIV and education, the conversation often skews toward sex ed and how to address disease transmission from a youth-oriented angle. This is, of course, a vital area of focus. But, sexual health education has to be something all Americans have access to if we are going to curb and eventually eliminate the influence of conditions like HIV and other health issues.

Public health initiatives and federal grant programs can make a world of difference in regard to equalizing the playing field of information and educational access, but the real initiative has to come from each and every one of us.

If the last couple of years of the pandemic has proven anything, it's that our healthcare system in general needs massive systemic change. This change is only going to come if everyday citizens take an assertive role in developing their own knowledge of issues like those pertaining to intimate health or the possible consequences of different types of drug use.

The deeper you look at the issue of HIV care and education in America, the more you realize the simple truth: It's a complicated mess, but for some pretty dumb reasons.

Healthcare officials and infectious disease experts alike can agree that the profit-first mindset of the American healthcare system does its citizens a disservice, especially as it relates to issues like HIV and AIDS.

"If you look at Fast Track Cities, the rest of the world is so far ahead of where we are," Dery said. "We will always be behind because we don't have a system of medicine that encourages people to use the system. It's a system that is privatized and profitized. Whereas the rest of the industrialized world doesn't have that system, they have systems of medicine that are really intended for people to utilize and get the most out of."

The stigma associated with HIV and AIDS still accounts for many of the problems experienced by patients and healthcare workers alike when it comes to the prevention and treatment of HIV transmission. The overall healthcare system is flawed at fundamental points, and the least understood and most heavily vilified portions of the population will often suffer in silent shadows of the healthcare market.

To put it into personal terms, you could say a major resolution for HIV and AIDS care in 2022 would be that it stop becoming a market altogether. Healthcare and medicine work best as a service, a utility made accessible to those in need of it. HIV treatment has come a long way, but the implementation of that science within the U.S. healthcare system leaves a lot to be desired.

If we could just strip away the shapeless and cruel stigma of HIV and AIDS in the public eye, and instead treat those conditions with the same reverence and dignity reserved for other illnesses, then we would likely see a lot of these resolutions accomplished or at least advanced upon in the coming years.

While an instantaneous HIV/AIDS awakening across the U.S. is unlikely to happen, after a year of talking to people working around, living with and fighting the HIV/AIDS epidemic, I truly believe there is hope for humanity to continue to learn from these illnesses and use that learning to improve the overall human condition and experience.

Dealing with HIV has helped us in so many ways on a medical and scientific level. Isn't it time we apply this learning in terms of compassion, kindness and common sense? Fighting HIV has helped heal the world's medical conditions—perhaps by focusing on the spirits of those living with HIV, we can heal our collective spirit a bit, as well.