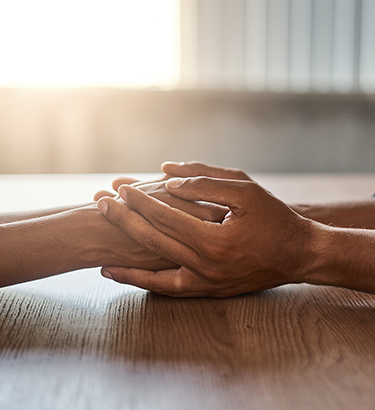 When to Tell People You're Pregnant Is a Personal Decision

There are several factors to keep in mind when deciding the perfect time to share the big news.

Sharing a pregnancy with friends and family is a different experience for everyone. Some are thrilled and tell lots of people right away, while others are more hesitant. The risk of miscarriage, other people's reactions and a desire for privacy can all play into your decision on when to announce the news.

And then, of course, there's the long-standing advice to wait until after 12 weeks before making a pregnancy public. But that norm seems to be shifting as more and more people are openly discussing pregnancy loss.

There is no right or wrong time to tell people you're pregnant. It is, however, helpful to consider how sharing the news will impact the experience of being pregnant—and why people wait, or don't wait, as long as they do.

So much is happening in those early weeks of pregnancy: Hormones are surging, your breasts are changing, morning sickness is making your favorite foods look hideous, and work is a miserable game of pretending to be totally fine. (Or maybe you do feel fine—after all, everyone experiences early pregnancy differently.)

Meanwhile, your future baby is developing from a fertilized ovum to a fetus, growing to about 6cm in length. Their heart starts to form, followed by their brain and face. Their limbs are growing, too, and by week 12, they even have fingernails.

Of course, all of that is assuming a healthy, developing pregnancy. But as all of those changes are happening in the first 12 weeks, the risk of miscarriage is highest. It is estimated that 1 in 4 pregnancies ends in miscarriage, and 80 percent of them occur in the first trimester.

Those might be scary statistics for excited, expecting parents to hear. But it's important to remember that 3 out of 4 pregnancies do not end in miscarriage. If you're in those early months, it's best to focus on that.

"I tell clients to focus on the facts you have today," said Elizabeth King, a certified fertility coach and doula. "If the test says you're pregnant, you're pregnant! Maybe you'll receive information next week that's not what you want to hear. But you can't do anything about that, so try to focus on staying in the moment." Otherwise, she said, people might obsessively check for symptoms and worry about worst-case scenarios.

Most people will have their first prenatal visit at around 8 weeks. At this point, your doctor runs tests to confirm your pregnancy, estimate your due date, screen for infection and assess the general health of the pregnancy. For some, waiting until they've had this appointment gives them more confidence in sharing their pregnancy with others.

The higher risk of miscarriage in the first trimester has contributed to a cultural norm of waiting 12 weeks before making the pregnancy public. The idea is if you don't tell people about your pregnancy, you won't have to tell them about a miscarriage, if one occurs.

For some women, that makes sense. They would rather not deal with telling people they are no longer pregnant, shortly after telling them they are. For others, they want people to know because they'll need support from friends and family either way. Many doctors and pregnancy experts report a shift toward the latter in recent years.

"Miscarriage used to come with this idea of being ashamed or embarrassed of losing a baby," King explained. Many of her clients have experienced a miscarriage in the past, which impacts their decision of when to tell family and friends.

"But we're normalizing the conversation around miscarriage," she continued. "I think the age-old practice of waiting 12 weeks isn't so prevalent anymore."

Today, it's more widely understood miscarriages are a very common experience. And there's nothing to be ashamed of if it happens to you. Part of that increased awareness is thanks to women who are willing to talk about their miscarriages publicly. For those who suffer through a miscarriage without their loved ones knowing, hearing stories that are similar to their own can be a huge source of comfort.

"It's very lonely to experience a miscarriage on your own," said Natasha Beck, MPH, Psy.D, a

child and family health expert and founder of Dr. Organic Mommy. Social media, she said, is doing a lot to make that experience less lonely—both for those who share the news of their own pregnancy or miscarriage and those who are looking for support.

Beck told her friends and family right away when she took a positive pregnancy test. Then, at 9 weeks, she had a miscarriage.

"The first thought I had was, what did I do wrong?" she said. "Even knowing the statistics and with my background, the thought of shame still popped up for me. But in reality, there is nothing to be ashamed of, and it's very common. I was glad my friends and family knew, as I had a ton of support."

If you do experience a miscarriage, and don't feel like you have enough support from the people in your life, it's important to find that elsewhere.

Social media offers many support groups for pregnancy loss, along with other types of reproductive-related traumas, said Cara Drescher, a health coach and educator specializing in infertility, pregnancy and postpartum, and founder of The Hormonal Mama. "It's a great opportunity to feel less alone and share your pain," she explained.

The benefits of sharing: Celebration and support

Sharing the news of a pregnancy early means you'll have more support in those first few months. You'll also have a chance to celebrate this enormous life event. There is so much to be excited about as you look ahead to the next nine months and beyond.

If it's your first pregnancy, you'll be hungry for knowledge and advice. Telling people can open the door to conversations about what to expect and how to prepare.

Even if you're hesitant about making your pregnancy public, King recommends selecting a small group of people who you do feel comfortable telling early on.

"Find your core support: Maybe that's your partner, your parents, your best friend," King said. "Find someone who you can share the joy [with] for the first 12 weeks, or however long you want to keep the news close to home."

That time of embracing the joy of your pregnancy is so important, King explained, especially if you're feeling stressed or anxious about what-if's. However you're feeling about your pregnancy, talking about it allows you to share in the excitement that others will experience when they hear the news.

"It lifts you up as well," King said.

Celebrating the news with friends and family can be momentous—but so can the quiet celebrations you might have with your partner or just yourself. If you're typically a private person who doesn't love a lot of attention, then you might prefer the experience of keeping the news to yourself—while that's still possible.

For some who have experienced pregnancy loss in the past, waiting to share the news until they've progressed beyond certain weeks or months is easier.

Cheryl Fork, founder of Fork and Melon, experienced seven miscarriages before her current pregnancy. (Her baby girl is due any day, and will likely be born before this article is published.) The first lost pregnancy impacted how she and her partner decided to tell people in later pregnancies. She would tell her inner circle of friends and family, but never made it to the point in the pregnancy where she felt comfortable sharing on social media.

"We waited to tell more people until after the first trimester, and then more people beyond that point, and then I finally announced on social media when I was 26 weeks in and everything up to that point looked positive."

The timing for telling an employer can also be a concern. Unfortunately, not being offered promotions or raises or more responsibility due to pregnancy are very real scenarios in some professional settings.

King said some of her clients don't feel confident in their standing at work, and that makes it more difficult to decide on when to tell their employer.

If that's the case, and you work in a place where you need to give presentations or have in-person meetings with clients, King recommends finding ways to block off time in the mornings, so you can ease into your day more slowly. This will be helpful if you're dealing with morning sickness—which might last all day, but is often strongest first thing.

King also advises confiding in a coworker or two who have gone through a pregnancy at work. They might have helpful advice or can simply be a source of moral support while you wait to tell other people at work.

It's perfectly acceptable to tell different groups of people at different times. Maybe you're eager to tell your best friends in the first trimester, but want to avoid the deluge of "Congratulations!" on social media until much later. Maybe you want to tell your friends and family but wait on sharing the news with coworkers until you're showing.

Wait as long as it feels right with whomever you want to tell. It's your news to share—or not.

Telling your loved ones is a big decision regardless of the timing—but telling someone who has lost a baby is an even more delicate situation. We've all seen reactions to pregnancy announcements, ranging from squeals and cheers to hugs and tears. But there is another experience that is less visible—sometimes hidden entirely. And that is the experience of hearing about someone else's pregnancy when you have experienced pregnancy loss or infertility yourself.

If you're the one announcing a pregnancy, the hope is your friends and family will be there for you—in whatever way you need them. So, in telling people who might struggle with the news of your pregnancy, it's important to be there for them, too.

"Make it an open conversation," King advised. If you have close friends who have any trauma surrounding pregnancy, start that conversation early and ask how much they're comfortable with hearing. Also remember, their tolerance and enthusiasm might fluctuate day-to-day. "Just check in with each other," King said.

The whole pregnancy experience in all of its many forms and stages is both deeply personal and inevitably public. You're adding a new person to your community, so including your community in whatever way feels best to you is the right place to start.

Whether you're sharing the news or receiving it, King advises simply asking: "How can I best support you?" You deserve to hear that, too.