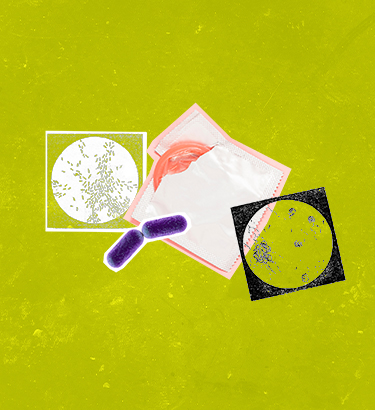 What Your Sex Ed Class Got Wrong About STIs

It's not exactly sexy to talk about sexually transmitted infections (STIs) and diseases (STDs), which makes them a great focal point for the sex education teachers who are trying to discourage young people from having sex.

But a new wave of sex educators with a more positive, inclusive approach to sex ed are opening up the conversation to more details and nuance regarding STIs. For women's health, this approach includes educating young girls on how to protect themselves if they choose to have sex; informing them on how STIs have the potential to impact fertility down the line; and acknowledging that while we all want to stay healthy in our sex lives, STIs are extremely common and shouldn't cause any shame.

By steering sex education away from scare tactics (think graphic photos of a severe herpes outbreak—eek!) and toward a more honest conversation about the risks, symptoms and treatment of various STIs, learning about these topics becomes a lot less cringey for everyone.

Helping young people to not be afraid of sex is a great way to encourage important conversations about sexual health and healthy relationships.

So let's take a look at what our gym teacher/sex ed instructor may have gotten wrong about STIs.

Condoms do not protect against all STIs

First, let's get the scary stuff out of the way. There are a lot of STIs out there, and it's true that besides abstinence, there's no way to avoid them 100 percent of the time.

"One thing they teach us in sex ed is to just use condoms," said Erica Montes, M.D., an Arizona-based OB-GYN and medical advisor to the Body Agency, a platform focused on women's sexual health. "But condoms aren't a guarantee that you won't get an STD."

Teens and young adults account for about half of new STIs, and condom education in schools has proved effective at reducing the spread.

Condoms are a very effective tool in preventing pregnancy, HIV and most STDs, and it's important for young people to feel comfortable using them. But when education on safe sex relies too heavily on condom use, students miss out on important information. Condoms aren't foolproof, and viruses including HPV and herpes can spread simply through skin-to-skin contact.

Much of traditional sex ed focuses on penetrative sex, and the type of sexual activities that might lead to the spread of STDs through skin-to-skin contact alone are often ignored. A student who does not engage in penetrative sex may not realize they, too, can contract an STD.

Andrea Barrica, the San Francisco-based co-founder of O.school, a sexual education platform, said that while she did learn about STI prevention as a young girl, the next steps were missing.

"In terms of how to actually have a healthy and functioning relationship with sex, I felt really in the dark about that," Barrica said.

Barrica started looking at online resources for sex education and found them severely lacking in advice on how to have healthy conversations surrounding sex.

Barrica now works with sex educators who emphasize an approach to safer sex that centers on the importance of discussing sexual history, sexual health and boundaries, because even when condoms are used correctly, both parties still open themselves up to risk.

Barrica said a big barrier she runs into when talking about STIs is avoidance of the topic entirely. People often associate a sense of shame with STIs—that contracting one somehow makes you dirty—so they don't even want to talk about them.

"But when you break your leg, no one makes you feel ashamed about it," Barrica said. "You go skiing a lot? You might break your leg, even if you follow all of the precautions."

The same thinking can be applied to STIs. Even if you take all of the recommended precautions, you might still contract an STI. "That doesn't make you 'bad,'" Barrica added.

The truth is most people contract a sexually transmitted disease at some point. About 85 to 90 percent of people with at least one partner of the opposite sex contract HPV in their

lifetime. In the United States, about 12 percent of people between ages 14 and 49 have genital herpes, according to the Centers for Disease Control and Prevention (CDC). It's hard to say how many people will contract chlamydia at some point, as it often doesn't present symptoms and goes undiagnosed, but the CDC estimates that 1 in 20 sexually active women has it.

So while it's perfectly normal to feel sad or scared by an STD diagnosis, it's also perfectly normal to have one. Regular doctor's appointments and STD tests—even if you're using protection or have only one partner—can help you detect STDs and treat them, reducing the spread and the impact they might have on your life.

You can have an STD without symptoms

"A lot of patients I see think, 'If I don't have symptoms, then I'm fine,'" Montes said. "But a lot of these infections can be asymptomatic, especially in the beginning."

That's why it's so important to go to your doctor for regular STD testing if you're sexually active. Montes said she offers all of her patients STD testing, regardless of their age or relationship status. Some people, such as those who are just starting to become sexually active or those who are in committed relationships, are scared to bring it up themselves. So she finds it helpful to put the option out there for everyone.

According to the CDC, most people with chlamydia do not present symptoms. But chlamydia is also the most common bacterial STI, so it's important to get tested regularly, regardless of symptoms. If chlamydia goes untreated, it can lead to bigger problems, such as an increased risk for cervical cancer or issues with fertility.

Montes said herpes is especially tricky to diagnose, and unless a patient presents with symptoms, doctors typically don't test for it.

"We don't recommend screening for it," Montes said. "It's a blood test that tests for antibodies. All that tells me is that you had it, you've been exposed to it at some point. That can become really confusing to counsel someone on."

As young people account for the highest percentage of STD infections, it's important for them to understand that even if they and/or their partner do not experience the symptoms of an STD, they still need to use protection against them.

Much of traditional sex education revolves around avoiding STDs and pregnancy. But many of the young students learning how to prevent pregnancy today will want children one day. Some of them will struggle to make that happen. Many people I spoke to about their sex ed experience shared this frustration: They wish someone had taught them that if they do decide to start a family, it's not always easy.

Even though many of our teachers dialed up the fear factor when it came to STDs, many of us were not informed of the link to infertility.

About 12 percent to 15 percent of heterosexual couples face fertility issues, and 25 percent to 30 percent of infertility cases are considered tubal factor infertility, which refers to scarring or blockage in the fallopian tubes. Chlamydia and gonorrhea are two of the most common STIs, and both can cause scarring and blockage in the fallopian tubes if left untreated.

Infertility is a painful reality for many couples who are trying to get pregnant, and understanding the link between STIs and infertility can go a long way to helping young people understand the importance of prevention.

HPV vaccines are safe and accessible

Human papillomavirus is extremely common. In most cases, it does not present symptoms and clears up on its own in one to two years. But it spreads easily, and when left untreated, can cause genital warts and certain cancers. Luckily, there are accessible vaccines that protect against most strains of HPV.

When Montes asks her younger patients if and when they received the HPV vaccine, they often aren't sure and turn to their parents. Unfortunately, she also runs into a lot of skepticism about the vaccine from parents. But studies show that the HPV vaccine is extremely safe and effective.

"And it can prevent cervical cancer and genital warts—that's amazing," Montes said.

While parents are often the ones keeping tabs on vaccines for young people, young women should understand their option to protect themselves from HPV by getting a vaccine.

Learning how to talk about sex and our own bodies is the first step toward embracing and enjoying healthy sex lives. Open, honest and inclusive sex education is important for the health and well-being of all genders.