Are Dating Apps Behind the Surge in STI Rates? Skip to main content 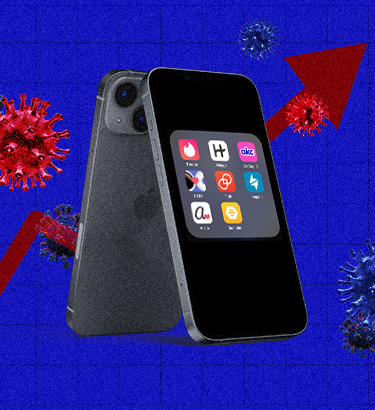 Are Dating Apps Behind the Surge in STI Rates?

It's easy to point a finger at technology, but health experts say it's not so simple.

Since the first lonely hearts ads began running in newspapers in the 17th century, the technology used to hunt down romantic partners has continued to evolve. Print personal ads paved the way for mediums such as videocassette dating, mail-in questionnaires, dating websites and, ultimately, the location-based geosocial dating apps that reign today.

"The mechanisms by which people meet keep evolving," said Jen Hecht, co-founder and director of Building Healthy Online Communities in San Francisco. "Folks care about connection and so they are creative about ways to connect with each other, be it for sex, be it for connection and community."

As reported rates of sexually transmitted diseases (STDs) like syphilis, gonorrhea and chlamydia climb to historic highs alongside the emergence of dating apps, it's easy to point a finger at the new technology for facilitating casual sex and the spread of disease.

clinical professor of population and public health sciences at the University of Southern California, a private research university in Los Angeles.

While dating apps may indeed play a part in the proliferation of sexually transmitted infections (STIs), the relationship between app use and STI rates is complex, and focusing on a potential link between STIs and dating apps misses the broader, more important issue.

"What we need to focus on is empowering people with education and the tools that they need to protect themselves from sexually transmitted infections," said Klausner, who is also the former director of STD prevention and control services at the San Francisco Department of Public Health.

In 2019, the United States reached an all-time high for the sixth successive year with reports of more than 2.5 million cases of chlamydia, gonorrhea and syphilis. According to 2022 data from the Centers for Disease Control and Prevention (CDC), reported cases of gonorrhea and syphilis surpassed 2019 levels.

Chlamydia was the only STD to show a decline, though it was emphasized this is more likely due to decreased testing than to an actual fall in infections. CDC officials and health experts warn that without action, millions of Americans could face serious, life-threatening repercussions, with the burden of infections disproportionately shouldered by low-income people and people of color.

The upswing in STI rates corresponds suspiciously with the rise of online dating apps. According to 2020 Pew Research Center data, the percentage of Americans who have used dating apps surged from 11 percent in 2013 to 30 percent in 2019.

On a surface level, the connection between rising STI rates and dating app usage makes sense. Dating apps widen social networks while enabling users to meet and hook up more easily and efficiently than ever before.

However, health experts generally agree there is little data that show increased app use equates to more sexually transmitted infections. Placing the blame on dating sites ignores myriad other factors.

For example, research indicates people on apps tend to be more sexually active overall than people who meet their partners in other ways. One study published in 2014 in PLOS ONE found no statistically significant difference in condom use between app users and non-app users but did find app users, in general, had a higher prevalence of sexual partners and were more sexually active.

One of the most straightforward explanations for the uptick in STIs in the past decade is that government agencies have redirected funding to problems perceived as more pressing. As a result, organizations that offered free or low-cost testing and treatment shuttered or reduced hours.

The dramatic rise in reported infections is likely driven by both increased infections and increased, improved testing. While testing for STIs was previously largely reserved for symptomatic patients, today, more sophisticated, accurate tests are being deployed routinely.

The problem with blaming dating apps

While dating apps certainly play a role in how people meet and expand their network of potential sexual partners, assigning them all the blame for increased rates of sexually transmitted infections is a dangerous oversimplification that ignores a larger, graver problem: a lack of safe-sex education and resources.

What needs to change?

"We need to provide access to internet-based testing services and online, easy treatment programs and really do a better job in our culture about being open and honest about human sexuality," Klausner explained.

Both Hecht and Klausner think dating apps could play big a role in promoting safer sex.

"In as much as there are opportunities for people to meet up through the apps, there are also opportunities to partner and work with the app to share information around sexual health," Hecht said.

As an example of how apps can promote safer sex, Hecht pointed to a feature already offered on a few gay or queer dating apps: the ability to indicate your sexual health status. It's an easy way for app users to share sexual healthcare information.

Another way apps could empower users is by providing or directing them to general sexual health resources and information. "For example, there might be a link to find out a testing site near you," Hecht suggested.

Compared to mainstream apps, Daddyhunt, Grindr and other apps directed at queer audiences have been lauded for their role in fighting the spread of STIs, including sending notifications about outbreaks, setting up regular testing alerts and directing users to a platform to anonymously message former sexual partners to tell them they may have contracted an infection.

Ultimately, what is most important to prevent the spread of sexually transmitted infections is not encouraging people to have less sex, but to have safer sex. The same principles apply to safe-sex practices whether you meet someone on an app, at a bar or after church, Klausner noted. Namely, get tested regularly, carry a condom and get comfortable asking a partner to use a condom.

"There has been a wonderful emphasis on consent and how to communicate what kind of sex you want or don't want," he said. "But there hasn't been the same kind of emphasis on communication on other aspects of sexual health and STI testing."

"Those are actually some pretty difficult conversations, and the apps could facilitate them," Klausner said.