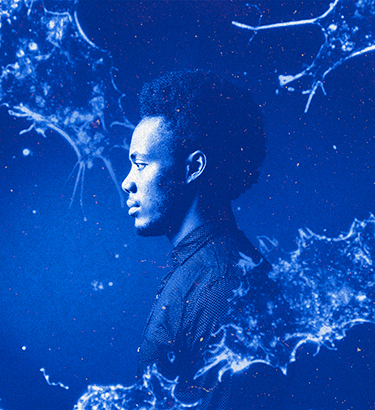 Beating the disease was the beginning of a lifelong 'responsibility' to help save lives.

In December 2014, David Ford's doctor suggested he undergo a routine colonoscopy for prescreening and early detection purposes. Just to be on the safe side.

Ford delayed scheduling the appointment. Like many men, he was nervous and uncertain about a procedure he'd only heard about.

Instead, he waited three months, and the delay proved too long. A tumor eventually ruptured in his colon. Three days later, 18 inches of his colon were removed to prevent cancer he didn't know he had from spreading.

To quickly sum up Ford's bout with colorectal cancer:

This brush with cancer, and his decision to put off the prescreening process, began to form his dedication—Ford calls it a "responsibility"—to helping other men avoid making the same mistake and enduring the same life-altering experience.

The next step in the journey came three years later.

During a routine physical—an appointment that he always made a point to attend following his battle with colorectal cancer—a blood test indicated an elevated prostate-specific antigen (PSA) level. A high PSA level is a potential sign of prostate cancer.

Ford's doctor recommended he visit a urologist, who performed a biopsy that found cancer cells in his prostate. For the second time in three years, he was diagnosed with cancer; this time, a cancer that will kill an estimated 34,500 men in 2022. And a cancer that will be diagnosed in about 1 in 8 men.

Ford's prostate cancer treatment consisted of radiation therapy, a different approach from the surgery he needed to treat his colon cancer. Thankfully, the process worked and he survived cancer a second time.

Don't wait for cancer to motivate you

His first fight with cancer laid the groundwork for his commitment to raising awareness, but his time spent in treatment for prostate cancer motivated Ford to take it a step further. He partnered with the American Cancer Society and began a life of advocacy. His reason? Without the routine physical that showed elevated PSA levels, everything would have been different.

"It was my naiveness, the procrastination that got me to the state where I was at," Ford said of his battle with colon cancer. "That prompted me to be much more vigilant in doing my annual physicals. That's when the prostate cancer was detected. Had I not been vigilant and [instead] allowed myself just to keep going without getting any type of prescreening test, that would have created a different path for me, because the cancer would have spread."

In his role with the ACS, Ford stresses exactly that: the importance of regular screenings and early detection. After all, that's what changed his life, and possibly saved it.

"Early detection is key," he said. "That's what helped me fight prostate cancer. Early detection and treating cancer before it gets into a more critical stage makes it much [easier] to address."

However, Ford wants to bring awareness to more than just the importance of prescreening. He wasn't prepared for some parts of his treatment. Now he hopes to help people fighting the same battle to be ready for treatment and everything that comes with it.

For example, fatigue is a well-known side effect. But eating a balanced diet and getting as much exercise as you can could aid your body during therapy. At times, this approach was very difficult for Ford, but even walking short distances once or twice a day helped, as did trying to keep up with his normal day-to-day life.

"I continued to go to work, and on the way to work I'd stop by and have my radiation therapy," he said. "So I had not only just the physical fatigue but the emotional, mental fatigue as well, the drain from working and continuing to go in every day."

Ford wishes he had been more prepared for the mental fatigue in particular. The physical effects of treatment are expected, but the emotional side is just as important, perhaps especially as a man, he noted. In hindsight, digging deeper into the support systems available to him would have been a game-changer.

"The courage that it took to continue with the radiation treatment, there's a lot of support out there that I did not ask about," Ford said. "I was basically looking at it from a clinical [perspective] but not from the emotional support. The emotional impact of having prostate cancer, how to deal with some of the emotional concerns that, as a man, how I could have talked through that with someone in a support-type of fashion that I didn't do, I think that would have been extremely helpful for me."

Ford's determination to raise prostate cancer awareness goes even deeper. As a Black man, he wants to ensure other Black men stay vigilant. Prostate cancer causes the most cancer-related deaths among that population in the United States, as about 1 in 7 Black men are diagnosed with the disease, and about 1 in 25 die from it.

"To me, it's a responsibility, particularly as a Black man, to take that level of consciousness, to be conscious about your health," he said. "The prevention is so important. Early detection and prevention, that basically is the prescreening process. Early detection gives you a much bigger chance of coming out on the other side."

There's also an obligation to the people close to you to get prescreened, Ford said. Early detection can save your life, which means saving the life of a father, grandfather, son or friend.

"It benefits other people in your life, in your family: your spouse, your children, your grandchildren," he said.

"I think the most important thing is love yourself, love your family and get prescreened," Ford said. "That's the gift that you can give to yourself and your family."

David Ford was named to the American Cancer Society Cancer Action Network's national board of directors in 2021 and continues to raise cancer awareness from his home in Los Angeles.