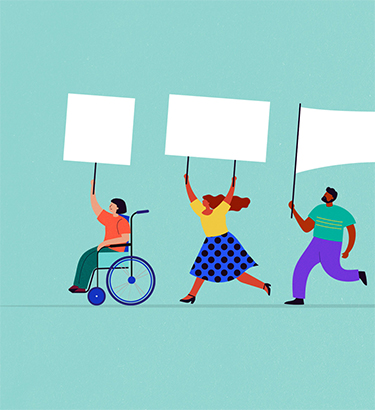 The History of Disability Activism and the Fight for the Right to Have Sex
Birds do it, bees do it. So why shouldn't people with disabilities do it?

It's the understatement of the century to call 2020 a tough year, but it was especially troublesome for Florida-based singer-songwriter-slash-music-journalist Jake Kussmaul. In addition to being hindered by the same obstacles as the rest of us—that is, social distancing requirements and a decidedly unsexy sense of gloom and doom—Kussmaul's romantic prospects were limited further by the fact that he was born with cerebral palsy and uses a wheelchair to get around.

"[People] are under the notion that even being attracted to someone like me is considered taboo," said Kussmaul, who broke up with his able-bodied girlfriend in May 2020. "I'm sick of the stigma that we're inadvertently excluded from dating, intimacy and other social milestones that many nondisabled people seem to take for granted."

According to Kirsty Liddiard, Ph.D., senior research fellow at the School of Education and iHuman at the University of Sheffield, and author of "The Intimate Lives of Disabled People," the denial of the sexuality of people with disabilities spans hundreds of years. In the last few decades, however, people with disabilities have begun to rally against the stigma surrounding disability and break down barriers to sexual expression.

Early civilization into the Middle Ages

People with disabilities have been stigmatized and subject to atrocities since antiquity, beginning with an association with curses and diseases. In ancient Rome and Greece, babies born with disabilities were routinely killed or later abandoned in the woods, their feet tied together to prevent them from walking out of the woods and being adopted by a passerby. Greeks who became disabled later in life became beggars, while ancient Romans with mental illness were denied basic citizen's rights, such as getting married and managing property and assets.

Middle Ages society wasn't much better. Influenced by Christian principles, the able-bodied viewed disability as a punishment from God. Cast as sinners, people with disabilities were sometimes treated with methods such as exorcism, prayer, incantations or even torture and starvation in an attempt to rid the body of the devil.

During the great witch hunts between 1480 and 1680, between 8 million and 20 million people were executed as witches in Europe. Most of those targeted were women and a good portion had disabilities, disfigurement or mental illness. A justice of the peace, Reginald Scot, described women targeted as witches "as commonly old, lame, blear-eyed...lean and deformed and showing melancholy in their faces."

According to Jessica Secmezsoy-Urquhart, Ph.D., an autistic, disabled, queer filmmaker and historian, the Rennaisance was a brighter spot in the otherwise dark history of disability discrimination. While "undesired differences" were stigmatized in other eras, certain disabilities were celebrated during the 15th and 16th centuries.

"The majority of court fools—often called jesters—were 'natural fools,' or believed to be neurodiverse," she said. During the start of the Stuart dynasty under James VI and I, natural fools, dwarfs and people with gigantism were not uncommon in court.

But this visibility was not equality. People with disabilities were rarely granted access to the same sexual rights as their able-bodied fellow courtiers. "Natural fools were often believed to be unable to consent or understand their own sexuality," she said. On the other hand, "'Wonders,' or bodily diverse people like those with dwarfism and gigantism, had their sexual behavior obsessed over and sometimes it was controlled or limited."

Formed in the late 19th century and running into the mid-20th century, the eugenics movement—which Erin Prangley, policy director for the National Association of Councils on Developmental Disabilities, describes as a "particularly disgusting, often forgotten chapter of U.S. history"—sought to eradicate "undesirable" traits in the human race through selective breeding. Championed by Darwin's half-cousin Francis Galton, supporters believed that disabilities, mental handicaps, criminal tendencies and sexual promiscuity were inherited and could be bred out of the gene pool. Advocates were particularly preoccupied with "feeble-mindedness," a vaguely defined condition that was thought to be identifiable by moral degeneracy and a high sex drive.

During this time, municipalities around the country introduced so-called "ugly laws," which barred all "diseased, maimed, mutilated, or in any way deformed, so as to be an unsightly or disgusting object" from "public view." Intended to "protect" healthy people from discomfort and danger, these regulations served to reinforce notions of the ideal citizen as white and able-bodied.

In addition to ugly laws, the 1927 Supreme Court case Buck v. Bell further fanned the flame of the American eugenics movement. The landmark case established legal authority for sterilizing inmates of public institutions, maintaining that mental deficiencies were hereditary and inmates should be prevented from propagating these traits to offspring. The decision would establish legal authority for the sterilization of between 60,000 and 70,000 people in 32 states during the 20th century.

Prangley noted that the practice of forced sterilization was largely discontinued following the 1942 case Skinner v. Oklahoma, which ruled that compulsory sterilization of adult prisoners convicted of certain crimes was unconstitutional. "But remember—Buck v. Bell didn't have anything to do with men in prison, it had to do with women who were deemed mentally incompetent—disabled women," she stressed.

Incredibly, Prangley emphasized, Buck v. Bell has to this day never been overturned.

It was in the late 1960s that the disability rights movement began to take shape, challenging negative attitudes while pushing back against oppression and rallying for political and structural change.

On April 5, 1977, protesters marched outside of government buildings in cities around the country, demanding the implementation of Section 504 into the 1972 Rehabilitation Act. Section 504 required that libraries, schools, courtrooms, subsidized transportation and other federally funded services be made accessible to the millions of disabled people who lived in the United States. It was finally signed into law on April 28, 1977.

According to leading protest organizer Kitty Cone, its implementation marked the "public birth of the disability rights movement...[and] the first time that disability really was looked at as an issue of civil rights rather than an issue of charity and rehabilitation at best, pity at worst."

The Americans with Disabilities Act

In the 1980s, disability rights activists began campaigning for the establishment of a comprehensive civil rights statute that would protect the rights of people with disabilities in regard to employment, government services and other aspects of public life—much like the Civil Rights Act sought to achieve for Black Americans.

After years of lobbying, revisions, amendments and negotiations, the Americans with Disabilities Act (ADA) was signed into law by President George H.W. Bush on July 26, 1990. The ADA is a sweeping piece of legislation that prohibits discrimination against people with disabilities in all areas of public life—including jobs, schools, transportation and all public and private places that are open to the general public.

Disabled representation in the media

The media—from plays and books to movies and TV shows—has a long history of reinforcing stereotypes around people with disabilities. A Ford Foundation report about disability in the media notes that portrayals of people with disabilities typically fall into one of four stereotypes: the villain (e.g., Captain Hook, a whole bunch of James Bond villains), the superhero who triumphed over their disability (Matt Murdock in "Daredevil," Professor X in "X-Men"), the victim (Tiny Tim, Quasimodo, Maggie Fitzgerald in "Million Dollar Baby") or the "innocent fool" (Forrest Gump, Raymond in "Rain Man"). In movies and shows, people with disabilities are often portrayed as dependent and asexual—rarely are they positioned as the romantic leads or sexual beings capable of desire and being desired.

But the future looks brighter. "The past decade has started to give us a lot of new representations," said Robert McRuer, a professor of English at George Washington University and author of "Sex and Disability." Depictions of disability onscreen have hit landmark highs, nearly tripling over the last 10 years compared to the previous 10 years.

The development of sexual surrogacy

A sex surrogate, also called a surrogate partner, is a trained professional who helps clients become more comfortable in their bodies and overcome social and sexual issues through hands-on intimacy. Sexual surrogacy is perhaps best known for helping those with anxiety caused by trauma or abuse, but it can also be used for clients with disabilities.

Since emerging in the 1970s, sex surrogacy remains a legal gray area in most of the U.S. and in most countries around the world.

Kirsty Liddiard noted that in countries such as Denmark, Switzerland and Germany, where sex work is legal and regulated, there is more access to and a more open mind toward sexual surrogacy services for the disabled. In Holland, sexual services may even be funded by the state.

While acknowledging that the regulation of sex work is important to protect the rights and safety of surrogates and other sex workers, Liddiard emphasized that greater access to sexual surrogacy for those who cannot have sex independently is only a very small step toward true sexual freedom for the people with disabilities, which requires a societal attitude shift and acceptance of the disabled as sexual beings.

What else needs to change?

"We live in a culture that tries to market a particular notion of what a beautiful body should be," McRuer said. "I think a lot of our norms about whose bodies are desirable and beautiful need to change."

He added that the emergence of disability studies schools has facilitated conversation and helped to normalize disability and sexuality. "Two and a half decades ago, you would go to an English Department, and there may not be anything about disability," he said. "But now, there are courses that include not just memoirs, but film and critical theory, too, which are key to changing power structures and attitudes."

The rallying of the disability community and growth of disabled identity politics is a start, Secmezsoy-Urquhart agreed, but she maintained that we still have a long way to go when it comes to freedom of sexual expression for the disabled. "Our fight for rights is far from over, and COVID has set us back in a way I'm unsure can be even fathomed yet," she said.

"While this might seem a very sad note to end on, it galvanizes me and makes me want to fight more through my work and through activism," she added. "I hope it sparks the same fury and passion for disabled justice in others."

Quoting disability activist Gregory Mansfield, she concluded, "Disabled people should not and will not be satisfied with anything less than access to everything."