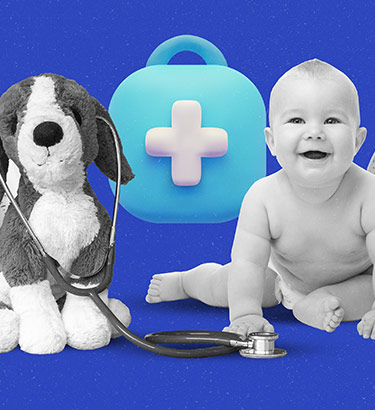 'Baby-Friendly Hospitals' Aim to Break Down Barriers to Breastfeeding
Regardless of this designation, patients still must navigate an imperfect medical system.

I remember the moment my daughter breastfed for the first time. It wasn't long after she had been born, though time was hazy then. I was holding her to my chest, as I had been doing most of her short life, except for some quick checks from the doctors because of fluid in her lungs.

I knew from the breastfeeding class I took while I was pregnant that newborn babies could find the nipple and try to eat very soon after they were born. I watched as my daughter started slowly migrating toward my breast and doing what's called "rooting," when a baby's mouth touches skin and they turn in that direction, attempting to find a nipple.

I thought to myself, "I think she's hungry," and I looked to the nurses and doctors to see what to do. Then I realized that I was her parent and it was up to me.

She latched onto my nipple.

This moment I had with my daughter is part of what baby-friendly hospitals attempt to protect. Uninterrupted skin-to-skin contact between the birthing parent and baby immediately after birth is one of the steps of the Baby-Friendly Hospital Initiative. This time is important to establish breastfeeding as soon as possible, but skin-to-skin contact is important for bonding, comfort and warmth whether the baby latches or not.

Before I gave birth, I didn't realize it's not always standard practice to allow that time for a parent to hold their child after birth as long as it's medically safe.

These hospitals also follow the International Code of Marketing of Breast-Milk Substitutes, which restricts the marketing of formula and bottles, including no advertisements or free samples of formula to patients while in the hospital.

The Baby-Friendly Hospital Initiative was launched in 1991 by the World Health Organization (WHO) and the United Nations International Children's Emergency Fund (UNICEF) as a way to implement these steps.

Studies indicate baby-friendly hospitals have been effective. Breastfeeding initiation rates increased from 58 percent in 1995 to 86.5 percent in 1999, according to a review of Boston Medical Center records published in 2001 in the journal Pediatrics. Similarly, breastfeeding increased from 79 percent to 83 percent after a nationwide initiative to increase the number of baby-friendly designated hospitals. This initiative was funded by the Centers for Disease Control and Prevention (CDC) and ran from July 2012 to August 2014.

Baby-friendly hospitals see a lot of misconceptions. There's a pervasive idea that they force women to breastfeed, a parent can't get formula if they want it and medical providers won't allow babies to go to the nursery even if the parents request it.

Whether a nursery is available depends on the hospital—some have them and some don't. The hospital where I gave birth did have a nursery, and nurses offered it to me without me having to ask. Formula is available when it's medically necessary, but it also should be available upon request.

"It's very easy to fall into the whole thing about making people breastfeed. It's really more about not stopping them from breastfeeding," said Anne Merewood, M.P.H., associate professor of pediatrics at the Boston University School of Medicine.

Baby-friendly hospitals are supposed to be about informed decision-making, support for parents and patient-centered care. Whether a parent uses formula or wants to breastfeed, they should still get skin-to-skin contact, rooming with the parent, and doctors coming to their room for most of the medical procedures—rather than the baby being removed from the parents to do the checks and procedures somewhere else in the hospital.

Parents who choose to use formula should receive education on how to safely prepare the formula, said Eileen FitzPatrick, Dr.P.H., M.P.H., CEO of Baby-Friendly USA, headquartered in Albany, New York. She said education is especially important in light of the recent formula recall. Parents who breastfeed should get lactation support from the staff, which should be trained to provide it.

Of course, all of this is an ideal scenario.

In reality, the effectiveness of the baby-friendly designation often comes down to the implementation and the actions of the hospital staff. My lactation consultant, a certified lactation consultant and birth and postpartum doula based in Chicago—who asked not to be named so she could speak freely for this article—said in her experience, the two hours of skin-to-skin time after birth that the hospital is supposed to offer new parents often ends up being more like one hour because of the realities of hospitals needing to get certain tasks done.

Some mothers have spoken out about negative experiences with baby-friendly hospitals, and the New York Times covered the topic in 2020, with medical professionals and parents weighing in on what they perceive as problems with the initiative.

The truth is, being a woman in any hospital can be difficult, and patients often end up in situations where they have to advocate for themselves in a system that doesn't always listen to women or prioritize patients' needs or requests.

Additionally, some issues in implementing the baby-friendly initiative have arisen because of the COVID-19 pandemic. Parents are being released more quickly than normal due to virus restrictions, sometimes within 24 hours, which may not be enough time to get breastfeeding established. Lactation staffing in facilities may have decreased as people were redirected to deal with the pandemic, and in the early stages of the pandemic, COVID-positive mothers and babies may have been separated.

The history of breastfeeding

In the early '90s, medical professionals prioritized the baby-friendly initiative in hospitals that served white patients instead of hospitals that served Black neighborhoods, wrote Amanda Calhoun, an adult/child psychiatry resident at Yale Child Study Center/Yale School of Medicine, in a 2022 Washington Post article about the racist history of breastfeeding in the United States. Racist attitudes about breastfeeding, in part, come from how enslaved mothers were forced to breastfeed white enslavers' babies instead of their own, Calhoun wrote.

Assumptions that Black and brown women don't want to breastfeed remain today, and women of color often have a more difficult time than white women getting the support they need to breastfeed at work and from lactation consultants and other medical professionals.

"Breastfeeding disparities amongst Black and white women are not by chance," Calhoun said in an interview for this article. "It's really because of a series of laws and behaviors and stereotypes that have really just trickled down."

"If you have a Black mother who is of a lower socioeconomic status and you're given all these free samples of formula, it sort of entices you to think, well, I guess I should formula-feed," Calhoun said.

Data show that Black newborn babies are nine times more likely to be given formula in the hospital compared with white babies, Calhoun added.

The baby-friendly initiative can be a part of decreasing racial disparities, FitzPatrick said, because it should offer an equitable provision of care—the same level of care and support to every mother.

When it works well, it does. Under the Obama administration, the government increased breastfeeding support as part of First Lady Michelle Obama's Let's Move campaign, which included ways to create a healthy start for children. This support included measures such as tax breaks for breast pumps and increasing the number of hospitals that adopted the baby-friendly initiative.

For example, Merewood worked on bringing the baby-friendly designation to the 13 federally administered Indian Health Services hospitals as part of this program. A 2019 study co-authored by Merewood and published in Pediatrics journal showed that the disparity in breastfeeding initiation between Black and white infants decreased by 9.6 percentage points after hospitals in the South implemented the baby-friendly initiative.

Women face a lot of pressure to breastfeed, and pressure is different from support. Baby-friendly hospitals attempt to provide support for new parents while they are in the hospital and connect them with support in the community so they can continue breastfeeding if desired.

But this is only part of the puzzle. People still have to advocate for themselves and deal with issues within the medical system. The baby-friendly designation doesn't erase that system, but it does attempt to break down barriers to high-quality maternal care for people who breastfeed—and those who don't.