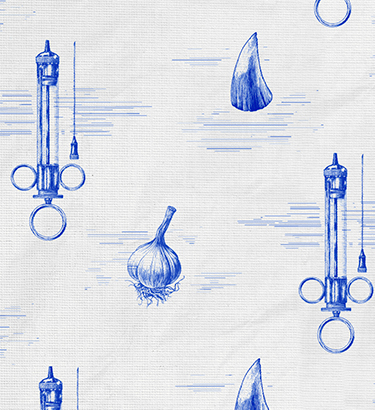 The Long and Bumpy History of STI Treatments
Ancient rituals, unappealing remedies and dangerous practices have given way to 'wonder drugs.'

Mere weeks before his reported death on April 23, 1616, 51-year-old William Shakespeare sat down to write his last will and testament. Though he began the document by proclaiming he was "in perfect health and memory, God be praised," his tremulous signature—and subsequent death a short time later—suggested otherwise.

What was the cause of the Bard's sudden, unexpected expiration? In his book, "Shakespeare's Tremor and Orwell's Cough: The Medical Lives of Famous Writers," John J. Ross, M.D., an associate professor of medicine at Harvard University, speculated that Shakespeare's shaky handwriting, social reclusiveness in later years and balding might have been caused by poisoning from mercury vapor inhalation. From the early 16th century to all the way into the 20th century, mercury vapor inhalation was the primary treatment for the sexually transmitted infection known as syphilis.

"The treatment for sexually transmitted infections could sometimes be worse than the disease itself," said Edward W. Hook III, M.D., emeritus professor of medicine at the University of Alabama at Birmingham and director of the STD Control Program for the Jefferson County Department of Health.

Sexually transmitted infections (STIs)—a modern term used in place of the outdated "venereal disease," which was derived from Venus, the Roman goddess of love—have been around "since humans have been mixing their mucous membranes with other people," Hook said. And as long as there have been STIs, humans have been searching, often clumsily, for ways to remedy their uncomfortable, itchy, painful, sometimes treacherous symptoms.

Today, virtually all STIs are treatable and many are curable, Hook said. But this wasn't always the case.

The earliest known records of STI treatments were transcribed in cuneiform on clay tablets by ancient Mesopotamians. In "History of Venereal Diseases from Antiquity to the Renaissance," Franjo Gruber and his fellow authors explained that these ancient medical treatments were primarily theocentric, or focused on gods or demons associated with the infections.

To remedy issues such as vesicles on the genitals and urethral and vaginal discharge—symptoms believed to be punishments from the gods but were more likely caused by gonorrhea, chlamydia, trichomoniasis or herpes—clergymen and exorcists performed sacrifices and magical incantations to dispel demons from the body.

In his 1995 article "Sexual Attitudes, Preferences and Infections in Ancient Egypt," English medical historian R.S. Morton noted how STIs were relatively uncommon in ancient Egypt due to a lack of social upheaval, a smaller population and a culture that promoted marriage at a very young age and celebrated domesticity.

However, in the 2011 book "History of Different Therapeutics of Venereal Disease Before the Discovery of Penicillin," Hungarian historian Judit Forrai noted how surviving papyrus documents do mention venereal diseases and genital discharges. She wrote that ancient medical authors outlined treatment of gynecological disease that included washing, salving and the use of scents.

"Common treatment of discharges resulting from infections were garlic, acanthus resin, cow horn, the grist of vegetable seeds combined with oil, put on a sponge and placed into the vagina," Forrai wrote.

Ancient Greeks and Romans: Oil and a kissing ban

According to Forrai, sex work was an important part of ancient Greek and Roman societies; accordingly, so was STI prevention. The word "herpes" was derived from the ancient Greek verb "ἕρπειν" (herpein), meaning to creep or crawl. In an attempt to stop the spread of herpes, Roman Emperor Tiberius banned public kissing.

In medical texts by Hippocrates, Galenus and Celsus, ancient physicians outlined several different STIs and linked their causes to sexual behaviors. To protect themselves, women frequently washed their vaginas, and men applied oil after visiting a brothel.

In the early 1500s, it became apparent to Western doctors that syphilis was contracted through sexual activities. This left physicians divided, as some felt syphilis was a punishment by God and shouldn't be treated. Others felt it could only be handled by harsh remedies, such as the popular mercury vapors treatment.

In "Syphilis: The Great Pox," a 1997 book, writer S.V. Beck described the medical procedure: "A patient undergoing the treatment was secluded in a hot, stuffy room, and rubbed vigorously with the mercury ointment several times a day. The massaging was done near a hot fire, which the sufferer was then left next to in order to sweat. This process went on for a week to a month or more, and would later be repeated if the disease persisted."

Unfortunately, excessive exposure to mercury is poisonous, causing skin peeling, hair, teeth and nail loss, mouth ulcers and even insanity. Many people—including Shakespeare, maybe?—died from mercury poisoning rather than syphilis itself.

Even so, the treatment remained popular for hundreds of years, with ammoniated mercury ointments surviving in the West into the 20th century, inspiring the common saying, "A night with Venus, a lifetime with mercury." (Ammoniated mercury is still used today as a topical ointment, in safer doses, to treat impetigo, psoriasis, minor skin infections and other skin disorders.)

20th century: Penicillin and other antibiotics

Fast-forward to the 20th century, which Hook called a landmark era for STI treatments.

In 1928, Alexander Fleming discovered penicillin, an antibiotic that can treat infections caused by bacteria.

"Penicillin was considered a 'wonder drug,' and it did indeed cure both gonorrhea and syphilis," Hook said.

In the 1940s and '50s, penicillin and other antibiotics became the standard treatment for STIs.

"Now when penicillin became widely available, several interesting things happened," Hook noted. "One is that one of the bacteria we're talking about, Neisseria gonorrhoeae, showed that it was able to become resistant to the doses of penicillin that were used for treatment."

"Interestingly, the bacteria that causes syphilis, Treponema pallidum, has not developed resistance and remains just as sensitive to penicillin therapy today as it was in the 1940s," he said.

Looking toward the future

"Right now, public health is in a little bit of a crisis over gonorrhea because fewer and fewer antibiotics are being developed by pharmaceutical companies," he explained.

However, Hook did have one sunny forecast for the future of STI treatments.

"There will be more and more opportunities for people to be tested at home in the privacy of their own home," he predicted. "And, hopefully, that will help to resolve some of the barriers to testing and management of these infections."