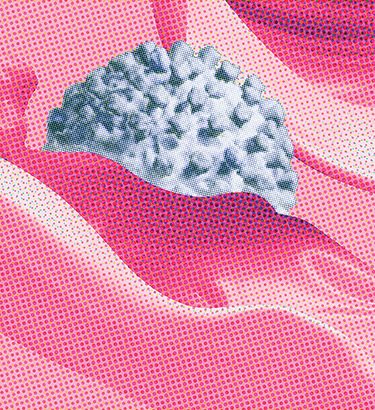 The Silver Linings of Living With an STI
HSV-positive advocates have endured herpes stigma and come out stronger for it.

Jenelle Pierce, CSE, Executive Director of The STI Project and spokesperson for Positive Singles in Asheville, North Carolina, doesn't believe everything happens for a reason, and she doesn't think of her HSV-2 diagnosis as a lesson from the universe. However, that doesn't mean she hasn't learned from it.

"There's a lot to be gleaned from having an experience that's not ideal, that you would not choose for yourself, or for others, for that matter," she said.

When Pierce was 16 years old, she was infected with one of the two types of the herpes simplex virus (HSV), an exceedingly common pathogen carried by about 500 million people worldwide.

Assuming people with herpes are somehow deviant or dirty is irrational, but Pierce thinks putting too much positive spin on the experience doesn't make much sense, either.

"We attach all these morals to behavior, and then to the outcomes of specific behavior, and it's really more simple than that," she said.

Humans, for better or worse, don't live by the dispassionate logic of microscopic organisms. In our communities, herpes is often still highly stigmatized despite its ubiquity. Many HSV-positive people undergo a severe—even traumatizing—level of distress after their diagnoses, Pierce said.

By the same token, overcoming the harrowing experience—like many other forms of hardship—makes you grow as a person, she asserted.

Stigma inside and out

Pierce is one of many STI-positive advocates working to undo the stigma around HSV. It's a tall order: Herpes stigma is a complex social phenomenon that's become deeply ingrained in American society.

There's no single cause for this kind of prejudice, Pierce said. Herpes stigma emerges from a variety of complex social forces, from bad journalism to poor sex education to the ad campaigns of large pharmaceutical companies.

But it can also come from within. When HSV-positive people internalize the logic of social stigma, they may come to believe they are unlovable, their sex life is over, or they are repulsive or irreparably damaged.

None of this is true, but the feelings are intense due to their deep-rooted nature, Pierce said. A lot of the suffering that follows an HSV diagnosis can be traced back to ideas around sex negativity and shame that many people learn at a young age.

"We find the people who it doesn't seem to impact a lot are the people who started off having a lot of really comprehensive sexual health education and come from really sex-positive backgrounds and spaces," she said.

Few are lucky enough to have this background, however. Whether they have a sexually transmitted infection or not, most people must spend a lot of time and effort unlearning internalized stigma, Pierce said. For her, it took more than a decade to feel like her diagnosis no longer defined her day-to-day life.

"It's always going to inform us, but it doesn't end up defining us if we don't allow it," she said.

Adrienne Rommel, a Toronto-based holistic nutritionist who goes by the Yoni Nutritionist online, said her HSV-2 diagnosis shaped her into the person she is today, but it was a long and difficult road getting there.

She's lived with herpes for about 20 years but didn't experience a lot of shame around it until several years after her diagnosis, when she returned to school to study nutrition. The high-stress environment triggered back-to-back outbreaks—once or twice a month for three years, she said.

"I avoided dating or going out to meet people, because I was so afraid of having to have disclosure conversations," she said.

Looking back, she wishes she could get that time back. After she graduated, Rommel said she was able to recover from her burnout and spend time researching the virus itself. Her background in nutrition taught her the importance of health and self-care, but it wasn't until she finished school that she began to apply it and significantly reduce the frequency of her outbreaks.

That healing process was critical to changing her relationship with shame and stigma. She has since learned to "make friends" with her diagnosis, reframing outbreaks as a sign from her body that she needs to slow down and focus on self-care and her health.

Rommel made it clear she's a nutritionist, not a therapist. But as someone who consults with clients about a holistic approach to their sexual health—and speaks openly on social media about her HPV- and HSV-2-positive status—a big part of her job ends up being helping people who are struggling with shame about their STI diagnoses.

She encourages clients to not solely focus on their physical health, but to explore root causes of the psychological toll of feelings of shame. Like Pierce, she believes shame is not inherent to the virus, and overcoming stigma requires processing its psychological roots.

"It always goes much deeper than herpes," Rommel said. "Herpes is just like a mirror that is right at the tip of our nose right in front of our face, showing [the stuff] that we need to work through."

"The biggest thing that herpes has brought to me, or however you want to phrase it, is community," said Devin Elise Wilson, who describes herself as a storyteller and community builder in New York.

Wilson is in the process of writing and pitching a comedy TV pilot called "Duck. I Have Heroes" (that's autocorrect for "F--k. I Have Herpes.") She's also the founder of a New York-based support network for HSV-positive individuals called Love Profound. The "STI Positive and Shame Negative" group began as a small meetup in her living room and expanded to over 3,500 strong at its peak membership.

When Wilson was first diagnosed with HSV-2 in August 2015, she felt completely alone. For nearly a year, she kept her status mostly to herself, telling only a few friends who lived far away.

"I spent all this time like, 'OK, if someone finds out about me, I'm never going to be loved,' or thinking if someone knew this about me, they would look at me completely differently," she said.

The opposite turned out to be true, she said. After almost a year of misery, she finally got fed up with hiding from the world. She joined a community theater production and began dating a castmate, who surprised her with sympathy and acceptance toward her HSV-positive status.

Her new partner (who happened to be a life coach) encouraged her to attend a "transformational weekend workshop." That weekend, Wilson found herself standing at a microphone—heart pounding, hands shaking—telling a crowd of 160 strangers she had herpes.

After she left the stage, people walked up to her sharing their own stories about their herpes diagnosis.

That revelation was the inspiration behind Love Profound. Wilson wanted to build a safe space for people to heal from the sense of isolation that STIs can cause, and to experience the same kind of self-acceptance that comes from opening up and connecting with others who are struggling, as well.

"The majority of us weren't given a choice," she said. "But once we're able to accept where we are, having a community to process with is really crucial."