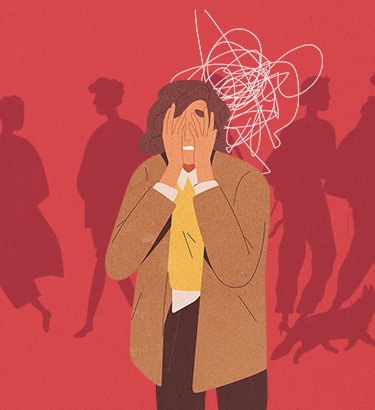 Long-Term Strategies to Cope With an Anxiety Disorder

Though anxiety is often overwhelming, experts say being present and mindful can help.

Feeling stressed or anxious is a normal part of the human experience. But for people with an anxiety disorder, those feelings of excessive worry or fear can be so intense and recurring that carrying out daily tasks and responsibilities becomes a serious challenge.

Although anxiety may be a long-term struggle for many, experts say there are strategies you can adopt to better cope with anxiety while still living a full and satisfying life.

The key is to support

"Anxiety is so much worry that it interferes with our life, it compromises our relationships and our ability to work and it can be devastating for people," said Jon Lasser, a practicing psychologist and professor at Texas State University's School of Psychology. "Sometimes therapy or a combination of therapy and medication can be effective in treating it, but there are also daily practices like mindfulness and meditation and relaxation that help people to better cope with anxiety and to calm themselves when they're stressed."

Anxiety can be triggered by different things depending on whether an individual has generalized anxiety, separation anxiety, social anxiety or another anxiety disorder. Experts are unsure of what specifically causes anxiety disorders, though traumatic events are known to trigger anxiety disorders in people already prone to being anxious or who have a genetic history of anxiety.

According to the Anxiety and Depression Association of America, about 40 million people in the U.S.—or about 18 percent of the nation's population—are affected by anxiety disorders.

Given how widespread anxiety is, chances are if you have not dealt with it yourself, you likely know someone who has. This prevalence is why it's important you learn more about ways to cope with anxiety, and how you can support a partner or a loved one who may be struggling.

What works best for you

If anxiety is impairing your day-to-day life, it's important to seek help. Treatment for anxiety can come in the form of talk therapy as well as medication, mindfulness- and meditation-based practices, just to name a few. Sometimes a combination of treatment approaches is necessary to get anxiety symptoms under control.

Lindsay Zilling, M.S., said working with a mental health professional is one of the first steps you can take toward finding what treatment works best for you. Zilling is a registered behavior technician and a doctoral candidate in the psychology program at Hawai'i Pacific University.

"Cognitive behavioral therapy (CBT) is an empirically supported treatment for anxiety, generally consisting of about 12 sessions," Zilling said. "CBT aims to draw connections between cognition and behavior and often considers alternative perspectives in reference to the presenting symptoms. Exposure is a common treatment component of CBT for anxiety and involves coming into contact with the feared stimulus in a controlled setting, working gradually to build progress."

Lasser said cognitive behavioral therapy can be particularly effective for individuals to recognize when their patterns of thinking are irrational or dysfunctional, and can help replace those thoughts with more adaptive ways of thinking.

"Often, the worries that come with anxiety are irrational, they're out of proportion—like the fear of something bad happening when it's unlikely to happen, for example," Lasser said. "A good therapist can help someone learn some techniques that they can use in their daily lives to manage those thoughts because when those thoughts get obsessive, they can begin to really interfere with things like sleep and productivity."

Working on your own

Outside of working directly with a mental health professional, there are techniques you can employ on your own when feeling overwhelmed. Zilling said one technique is referred to by the acronym TIPP:

David Schlosz, a licensed professional counselor who works with children and adults at his private practice in addition to teaching at St. Edward's University and Texas State University, said he teaches his clients techniques to cope with the anxiety that are designed to help them be more present and grounded.

Schlosz said he often suggests the 'three-two-one' exercise. During the exercise, the individual starts by picking out three things they can see, hear and feel, followed by deep breathing. Then they repeat that pattern two more times with the patient picking two things the second time and one the final time.

"These mindfulness exercises are incredibly powerful," Schlosz said. "What this does is it grounds the person and brings them out of their head into the here and now, back into the body. And that makes all the difference in the world."

If the first treatment method or coping strategies you try don't work for you, don't give up.

"There are many forms of treatment available that can greatly improve symptoms of anxiety," Zilling said. "It is important to note that one treatment might work better for some people than for others, so try to keep an open mind until you find the best fit for you. That goes for clinicians as well—if the first one you see just isn't right, it's completely normal to try someone else."

Lean on your support system

While your loved ones can't make your anxiety disappear entirely, being supported by them when you need it most can provide comfort. When seeking support from a loved one, make sure it's someone you trust and feel safe with.

"Preface personal disclosure by reminding your audience that you are seeking their support because your relationship is meaningful to you," Zilling said.

"A good way to communicate your needs to your support system is to tell them about the things that trigger your anxiety and how they can best acknowledge those triggers," she added. "For example, if you are someone with anxiety who experiences irritability in relation to specific topics of discussion, let your support system know what they are. A mutual understanding might reduce occurrences of the topic or will remind them you might need support if the topic cannot be avoided."

Identifying your triggers can help you plan ahead to potentially avoid situations that would otherwise lead to anxiety that would get in the way of your day-to-day life.

"For example, if you're going to the movies but know that speaking to strangers or getting caught in the hustle and bustle of a crowd makes you anxious, then you might arrive at the theater early or after the previews for the movie have already started so you can avoid the rush," Schlosz explained. "You can also order your snacks online so that they're ready for you at the counter and you don't have to order them in person. And if you make your partner aware of your triggers, you can plan ahead together so you can still enjoy the things you want to do together without letting anxiety get in the way."

Will your anxiety ever go away?

Since anxiety is a natural human emotion, it's unlikely that it will ever fully go away. In fact, it's best that it doesn't: A little anxiety in your life is healthy and normal. That being said, you need to get anxiety under control to a degree to where it doesn't interfere with your quality of life.

"Anxiety is often considered a naturally occurring reaction that evolutionarily adapted as a means of survival. Said more simply, anxiety is good," Zilling said. "Say we are sitting in front of a hungry lion—anxiety tells us that we should be afraid and activates our fear response system to freeze, flight or fight. With that in mind, it's never the goal of treatment to get rid of anxiety—rather [it's] to build effective tools to manage anxiety."

"Many people have settled with the fact that if they have an anxiety disorder, it's something they will struggle with for the rest of their life," Schlosz said. "However, the latest research regarding brain plasticity should provide some hope to the contrary. And that's because the brain is an organ just like the skin. And just like the skin, the brain can heal itself when it is under the right conditions.

"The research indicates that our brain can rewire itself," Schlosz continued. "And that's why brain plasticity is such a huge deal and why mindfulness is such a big deal because it's through mindfulness exercises and therapy that we can learn to react differently to anxiety and consider alternative responses, which can help rewire our brain over a period of time."

Although some people disagree, Schlosz believes healing is found through sustained and consistent mindfulness practices, and other treatments that help individuals find adaptive and productive ways to respond to anxiety.

"Sometimes that healing might just look like the effective use of coping mechanisms over an extended period of time," Schlosz said. "I think that's what healing looks like. It looks like the length and intensity of the panic attack or the anxiety episode is decreasing and the length between anxiety attacks or episodes increasing."