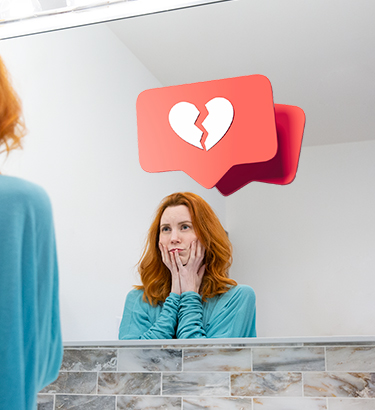 Dealing With Body Image Issues in the Age of Social Media

Taking simple daily actions will improve your relationship with body image and eating.

When living in a world with so much focus on social media, it can be easy to fall down the rabbit hole of comparisons, whether that's between lifestyles, relationships or bodies. Perhaps unsurprisingly, the journey through this rabbit hole can lead to a damaged body image and an unhealthy relationship with food and exercise.

For many social media users, it can seem nearly impossible to scroll through a daily (or hourly) feed without coming across edited photos highlighting unrealistic body features or advertisements promoting the latest diet culture craze. You know the type—tummy teas, appetite inhibiting lollipops, and so on.

"Those messages that are out there in our society can be so harmful," said Anna Brown, a licensed clinical psychologist who serves as the clinical director at the Eating Recovery Center in the Woodlands, Texas. "So what we can do is wield our power in ways like unfollowing accounts that are promoting really harmful messaging, the types of accounts that promote eating disorder behaviors."

Recent reporting from the Wall Street Journal revealed Facebook has known for some time that Instagram, which it owns, has failed to crack down on accounts that promote eating disorders and extreme dieting, and has even actively promoted them—a fact shown to have negatively affected the mental health of young people who use the platform, particularly teen girls.

But while social media may exacerbate toxic diet culture messaging, it's not a new issue in our society. Studies have shown that before social media, the idea of the "ideal" body shape for both young girls and boys was influenced by magazines and television.

Brown noted that advocating for more funding for mental health resources from elected officials could be a step in the right direction to help foster a culture better equipped to support individuals struggling with these issues.

"A lot of people just aren't educated about how significant and how rampant eating concerns are, and how serious they really are," she explained. "And they're also often unaware of the fact that eating disorders and body image issues affect men far more than they realize. They think of eating disorders as just like a young girls' disease. So even just education is such a big part of it."

Eating disorders include a complex and often life-threatening set of mental health conditions that involve unhealthy eating habits due to disturbances in an individual's thoughts, behaviors, attitudes toward food and body image. Statistics show that about 20 million women and 10 million men in the United States have suffered from an eating disorder at some point in their lives, with most eating disorders being found among young women.

"Although social media has proven it can have a negative effect on mental health, that doesn't necessarily mean you have to cut it out completely. Instead, reevaluate your relationship with social media and set healthy boundaries in regard to how you use it," said Chelsea Kronengold, communications lead for the National Eating Disorders Association (NEDA).

"One positive we've really seen throughout COVID has been the increased virtual support people can now get from mental health professionals and the ability it has given people to connect with each other during quarantine," she added. "While we were physically isolated from other people, social media provided an outlet for people to socially connect."

On the flip side, Kronengold said, the increased social isolation that began at the start of the pandemic led to an increase in new disordered eating behaviors or relapses in people who had previously struggled with eating disorders.

"We've also seen an uptick in content about 'how to lose the COVID weight,' which led to the popularization of this new term of 'the Quarantine 15' or 'the Quarantine 19,' which is a play on the Freshman 15," Kronengold said. "So there's been this hyper-focus on diet and exercise throughout the pandemic when we're all just trying to survive."

It's not uncommon to see social media influencers promoting various weight loss products, many of which often lack approval from the Food and Drug Administration (FDA). Kronengold noted that while some influencers are actually experts or specialists in eating disorders or body image issues, many may be sharing products they don't have much background knowledge on at all.

"It's important to practice media literacy and be mindful of who you're getting your advice from," Kronengold said. "If you've noticed that social media is impacting your body image or that you're feeling triggered in terms of an eating disorder, then it's likely time to log off. Take a break. Go do a different activity that brings you joy.

"One of the most helpful things you can do to minimize harmful or triggering content in your social media feed is to curate who you follow with your mental health in mind," Kronengold continued. "Unfollow accounts that don't make you feel good about yourself, whether that's people or companies. And likewise, follow accounts that promote body diversity and pro-recovery or anti-diet-culture-type messages."

Brianna Donahue, a clinician and clinical intake coordinator at the Multi-Service Eating Disorders Association (MEDA), noted that it's important you be absolutely honest with yourself about how the content you're consuming makes you feel.

"For some people, watching 'what I eat in a day' videos maybe gives them inspiration for new recipes," Donahue explained. "But potentially for somebody else, maybe those are triggering and make them want to restrict their food intake or lead them down a path toward a more distorted relationship with food. So I always tell people to really just be honest with themselves with their relationship with social media. Ask yourself: 'What's my relationship with these things? Are they benefiting me? Are they hurting me?'"

How to seek and give support

Similarly, MEDA's website also provides a list of free eating disorder recovery support groups, along with groups for parents and family members of those suffering from an eating disorder.

"I think it can be easy to have a very false notion of feeling like, 'No, I can live just fine with this.' But when it comes to these things, the sooner you can get help, the better," Comas said. "People often just look at someone's weight as an indicator of their health, but there are so many other things that are going on that you can't see. You could have vitamin deficiencies or issues with blood pressure and your heart and things like that. So even while you might feel like it's under control, you need to remember that sometimes when things get bad, they can get bad really quickly and suddenly."

"If you're worried about your partner or a loved one's eating behaviors, or attitudes toward food and their body, you should express your concerns to them in a loving and supportive way," Kronengold said.

"One of the ways to do that is to address specific behaviors or concerns by using those 'I statements,'" Kronengold added. "So, for example, you could say, 'I'm concerned about you because you refuse to eat breakfast or lunch,' instead of an accusatory statement like, 'You must eat something, you're out of control.' So, framing it from a place where the individual expresses their concerns and then backs it up with specifics."

After communicating your concern, the next step is encouraging them to get professional help.

"As a partner, you don't have to take on the role of their therapist or dietitian or their doctor," Comas said. "Thinking that way could be really stressful. So it's important to remember that there are professionals out there that can do that. And you can be someone who gives support and love as they go through that process of getting help."

Kronengold noted that though society has a long way to go before diet culture and unrealistic body images on social media are a thing of the past, there are things everyone can do in their daily lives to lead by example.

"Another thing people can do is be mindful about the comments they make internally and externally about their own bodies and the bodies of others," she added. "Try to remove that connection of your sense of worth to what you look like and instead focus on who you are as a person, the things that make you unique, your values [and] your character, and do the same with others."

It can also be helpful to avoid appearance-related comments, even if your intentions are well-meant.

"Often in our culture, people will say things like, 'Wow, you lost weight, you look great,'" Kronengold said. "But you don't know if someone is experiencing an eating disorder or another health issue, or if they're going through a hard time. So you really don't know the reason why people may lose weight or gain weight. And it's really nobody's business to comment on."